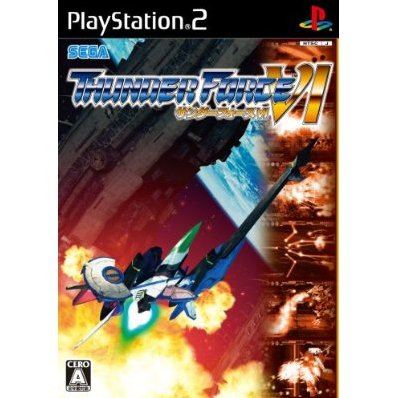 sold Out of print / Out of stock.
Manufacturer
Sega
Rated By Our Customers
Compatible With PlayStation 2™ (PS2™)
Version

Thunder Force is one of the long living classic series that pushes the limits of the consoles which the games are published on. The first game was released in 1983 as a horizontal scrolling shooter. As the games developed, new elements are added to the series, like enabling a 360 degrees scroll function and introducing more planes and weapons for every new installment.It inherits the adrenaline pumping gameplay and the voluminous amount of weapons and stages. If you are sick of the gimmick filled games and is dying to have some traditional shooting fun, Thunder force IV is the game for you.A star studded cast of sound producers are working together to hit you with full thundery force. The list of composers are: Tamayo (Rayforce) Sato Tsuyoshi (Raiden Series) Furukawa Motoaki (Gradius II) and Kaneko Tsuyoshi (Sega Gaga)The war between the Ohn Empire and the Federation are still in full swing. Participate in the war effort in this famous title via your PlayStation2.華麗な演出、重厚な世界観、爽快なプレイフィールなど、伝統を浮け継ぎつつ、さらなる進化を遂げた「新世紀サンダーフォース」。地球と銀河連邦、オーン帝国を巡る「サンダーフォース」の壮大な物語が、遂に解き明かされる！失われた「シューティングの王道」がここにある…。

If you are familiar with Thunder Force VI, why not let others know?

antony5 (3) on 27, Mar. 2013 06:19 (HKT)
Typically Thunderforce
Thunderforce VI is a great looking, sounding and playing game, but it's not got anything really new to add to the series. In a lot of places it draws directly from earlier titles in the series. Originality is not its stronpoint. Gameplay however is and it is very enjoyable in a typically Thunderforce vein. Worth the money in my opinion (and I have II, III, IV and AC as well!)
bgmxmsg (1) on 05, Mar. 2012 05:46 (HKT)
Avoid like the Plague!
Utterly jerky + laughable gameplay + crap music = Absolute Abomination!
Heikai (11) on 01, Jul. 2011 13:05 (HKT)
Great shooter
Excellent game. I got it pretty cheap with sale price.
manudyson (23) on 17, Jun. 2011 00:04 (HKT)
Sequel of the legendary saga
After years from the last TF for Segasaturn and Playstation, the six istallment of the saga arrives to the Ps2. Wonderful graphics, great ost and an excellent gameplay, a must have.
ricardoramirez (175) on 09, Jun. 2011 22:52 (HKT)
Classic Thunderforce
this is a good choice. You gameplay requires no Japanese proficiency.

Wish there was a Thunderforce collection so more people could enjoy these games.
1 »