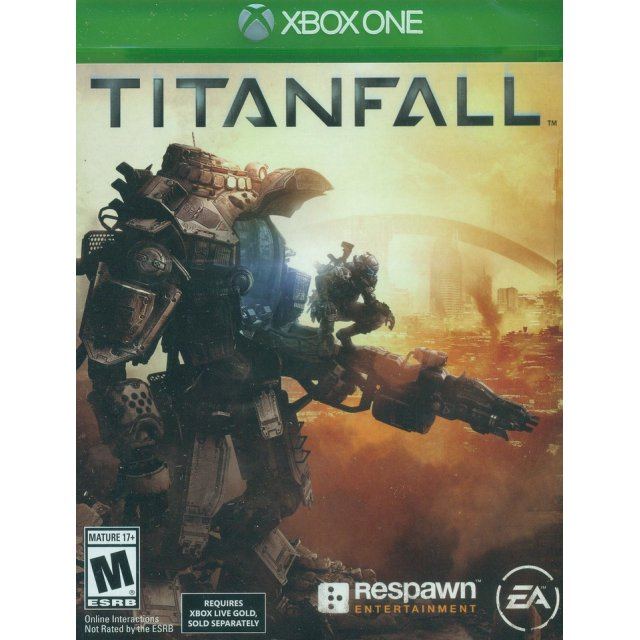 Works on all systems sold worldwide, a correct regional account may be required for online features.
24h In stock, usually ships within 24hrs.
US$14.99
Our previous price:US$ 59.99
You save: US$ 45.00( 75% )
Manufacturer
Electronic Arts
Compatible With Xbox One™ (XONE™)
Version

Works on all systems sold worldwide, a correct regional account may be required for online features.
24h In stock, usually ships within 24hrs
Price
US$14.99
Our previous price:
US$ 59.99
You save:
US$ 45.00( 75% )
Play-Asia.com Return & Refund Policy
Click on a thumbnail to see more pictures for Titanfall

Get Ready for Titanfall:

Winning over 60 awards from critics around the world and offering an expansive online multiplayer experience, Titanfall is one of the most anticipated and awaited games of all time. Developed by Respawn Entertainment and crafted by one of the co-creators of Call of Duty 2, Modern Warfare and Modern Warfare 2, Titanfall will deliver a brand-new online experience that combines smooth, fast-paced multiplayer action with the exciting addition of Mecha on Mecha battles. Titanfall will launch exclusively for Xbox One, PC and Xbox 360.

The story is centered on a member of a roaming space fleet caught far from home, roving on the edge of space known as The Frontier. Titanfall sets players in the middle of a war between the Interstellar Manufacturing Corporation (IMC) and the Militia. Battles range from small vs. giant, natural vs. industrial and man vs. machine.

The Next Generation of Multiplayer Gaming:

Fans of first-person shooter will be thrilled as Titanfall brings a fast-paced, near-future conflict that gives players the freedom to fight as both elite assault pilots and agile, heavily armored Titans. Featuring a multiplayer match with 6 vs. 6: 6 human players on each team, each with their own AI-controlled Titan and an extra 12 AI soldiers per team. Only in Titanfall can players experience the heart-throbbing multiplayer action and feel the true next step for the FPS genre!

If you are familiar with Titanfall, why not let others know?

Blazing_187 (4) on 20, Oct. 2014 13:37 (HKT)
Its ok
The idea of the game was good, but it is kind of small in scale, visually it looks ok and the game play is nice and the addition of bots helps keep you busy, its not a bad shooter but among many other great fps games it doesnt really stand apart
brunot.frassetto (1) on 08, May. 2014 20:28 (HKT)
Titanfall - O melhor jogo ate então para Xbox.
Um dos melhores jogos que joguei da minha vida e o melhor jogo já lançado para xbox one.