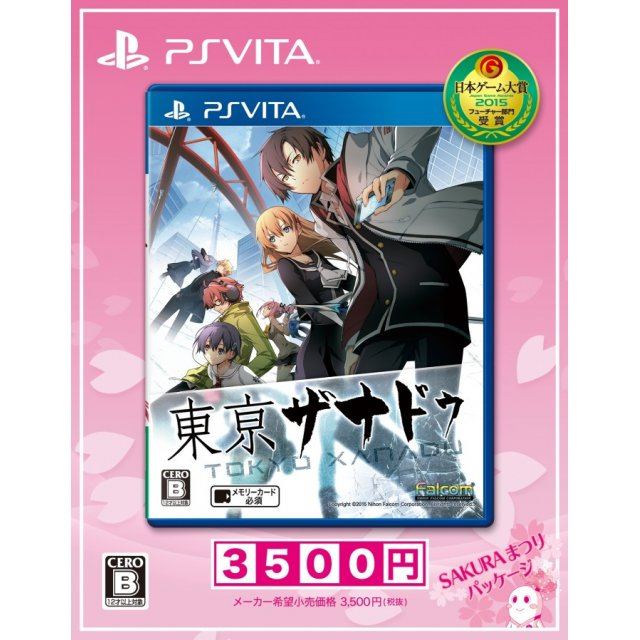 Works on all systems sold worldwide, a correct regional account may be required for online features.
1w Expected stock arrival within 1 week.
US$39.99
Our previous price:US$ 44.99
You save: US$ 5.00( 11% )
Manufacturer
Falcom
Rated By Our Customers
Compatible With PlayStation Vita (PS Vita)
Version

Works on all systems sold worldwide, a correct regional account may be required for online features.
1w Expected stock arrival within 1 week
Price
US$39.99
Our previous price:
US$ 44.99
You save:
US$ 5.00( 11% )
Play-Asia.com Return & Refund Policy
Click on a thumbnail to see more pictures for Tokyo Xanadu [Sakura Matsuri Package]

Tokyo Xanadu is an upcoming action-RPG being released by Falcom that primarily follows two 17 year old students from Morimiya High School, along with their classmates. When Kou Tokisaka stumbles upon Asuka Hiiragi fighting mysterious creatures known as 'Greed' he is thrown into a whole new world filled with action and danger.

Greed are creatures that wander complex labyrinths in the 'Other World,' coming in a variety of types, shapes, and sizes. Normal weapons from the real world are ineffective against them; only Soul Devices made from spirit particles that can hurt them. Entering the Other World is made possible by Eclipses, or special gates between the two worlds that can only be seen by 'The Qualified.'

Each character fights differently as they each use different Soul Devices which effect both attack speed and range. The most basic attacks used are Standard Attacks which are up close and personal, with well-timed button presses enabling players to pull off attack chains. Each character also has three different types of special Skills at their disposal - shooting, aerial, and power abilities. Shooting being long distance, aerial being mid-air, and power being charged up attacks.

Players can customize their Soul Devices from the settings screen, where you can modify each device using the items and raw materials picked up throughout their journey. You will be able to set your main weapon attribute, as well as learn new abilities and strengthen existing ones.

If you are familiar with Tokyo Xanadu [Sakura Matsuri Package], why not let others know?

Chiquihuite (13) on 30, May. 2017 05:33 (HKT)
Recycling done well!
Tokyo Xanadu is Falcom's effort to recycle much of the work done for Trails of Cold Steel (Sen No Kiseki) into a very different setting, and to be honest they execute on that pretty well.

Pros:
-Beautiful art and music, as always
-Loveable cast of characters. Even the protagonist has a strong personality, which is something I've come to expect and appreciate from Falcom games.
-Action combat is well-executed and fun. The use of elemental and combat type affinities as an "incentive" to switch up your character use is really good design.
-Cleverly written scenarios and creative side-quests

Cons:
-Story pacing feels a bit on the slow side, even by Falcom standards.
-Platforming elements in dungeons start gentle and then ramp up in difficulty in a way that's surprising and often inconsistent.
-"Upgrade" items used to unlock and empower your grid and skills are excessively numerous and confusing. Compared to the cleanliness and simplicity of Sepith, this upgrade system felt like a major step back.

If you don't mind a slower-moving story from your action RPGs, you'll probably like this one a lot.
vindal0012 (5) on 12, Sep. 2016 15:14 (HKT)
Great Action RPG Game with deep character interaction
It feels like Persona but it's more of Nihon Falcom-style gaming. If you're familiar with their games (Trails series and their character interaction), you'll like this game. But for this version, deep kanji and Japanese language understanding is recommended.
pauloredline (169) on 17, May. 2016 07:11 (HKT)
Great Game
Um Belo game feito pela FALCOM, parabéns, uma empresa pequena e muito competente criando 3 das melhores franquias que joguei(Legend of heroes, Tokyo xanadu e YS series)
[This review is based on another version of this product]
terrysap (18) on 13, Nov. 2015 03:51 (HKT)
Great edition
Play-Asia is the best store to buy the limited and other editions