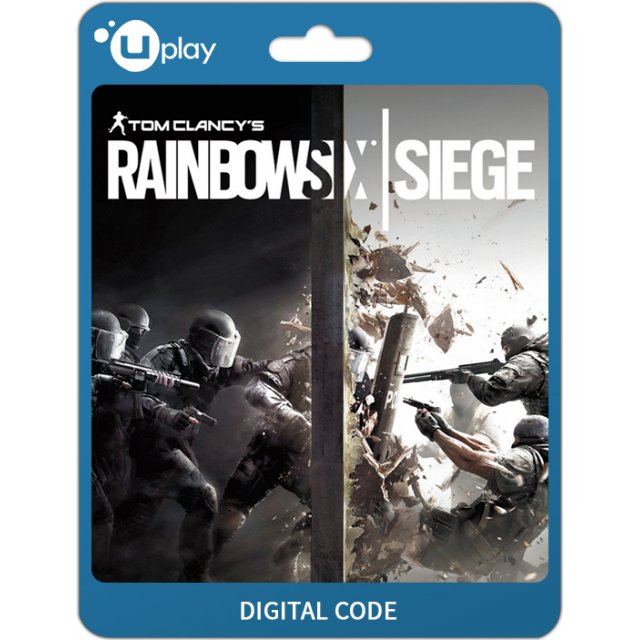 Region Free
This item will deliver instantly in your account. Some orders may be subject to verification by SMS or Voice which may cause delays.
US$10.65
Manufacturer
Ubisoft
Price
US$10.65
Play-Asia.com Return & Refund Policy
Click on a thumbnail to see more pictures for Tom Clancy's Rainbow Six Siege (English)

The Destruction and Violence VS Justice:
Are you a mastermind of destruction and violence or the man securing the safety of the population and the force of justice? Tom Clancy's Rainbow Six Siege will transport players in the center of dangerous close-quarters conflicts, set between a team of hostage takers and team committed in freeing that hostage. Created by the famous Ubisoft Montreal studio, Rainbow Six Siege is the latest tactical first-person-shooter in the series that will be release on next generation consoles, the Xbox One and PlayStation 4, as well as on Microsoft Windows.

The Innovation of the Game’s Environment:
Experience the full multiplayer focus and destructible environments of the game that will unleash the aggression, unpredictability and tactical thinking of the players. Tom Clancy's Rainbow Six Siege features a technological innovation that will give an exciting way of interacting in a game environment. The environment of the game corresponds authentically, distinctively and dynamically in any action made by the player.

Strategy and the Ability to Adapt:
The game, based on the reality of counter terrorist operatives across the world, is a tactical 5-v-5 multiplayer shooter with a team of terrorist and the armed forces of Rainbow Six team. The terrorist will hide the hostage and strategically plan the transformation of their environments into a fortress by fortifying the walls, barricading the windows, deploying shields and mines, and more! The team of Rainbow Six will tactically assault and breach the enemy’s position by blowing up walls and windows to create access points and shooting holes in things to create lines of sight. Each team will have a way of reconnaissance, a CCTV camera for the terrorist and camera drones for Rainbow Six team. Being able to see the approaching enemy will give the players the chance to adapt their plan and rearrange their map based on what the other team is doing.

No reviews for Tom Clancy's Rainbow Six Siege (English) yet.