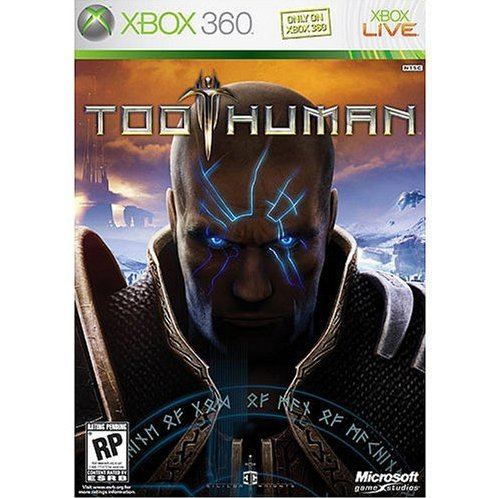 sold Out of print / Out of stock.
Manufacturer
Microsoft
Rated By Our Customers
Compatible With Xbox360™, Xbox One™
Version


Click on a thumbnail to see more pictures for Too Human

Step into the world of Too Human, the epic action-game for Xbox 360™ from famed developer Silicon Knights®. As the Cybernetic God Baldur, you get thrust into the midst of an ongoing battle that threatens the existence of mankind. An ancient machine presence has forced the God’s hand. In the first of a three part trilogy, Baldur is charged with defending mankind from an onslaught of monstrous war machines bent on eradication of human life.

If you are familiar with Too Human, why not let others know?

You can get interrupted mid heavy attack by a mini-boss hitting you but you can't cancel it yourself with a roll or jump. Health only drops from enemies, so once things start to go downhill they just keep getting worse, because you're attacking a single thing at once, and they're all belting you. You will die. Often.

But it doesn't matter! Because death is inconsequential. You just get shunted back a touch and you're good to go. What a great way of dealing with a badly designed combat/enemy system, well done guys.

The talent system is an obvious afterthought and pathetically implemented to boot, the combo system that only has three charges and shares itself between ruiners, spider bombs and battle cries, and the loot system makes stuff drop so often you'll be going through the painfully setup menus every 2 minutes to change gear.

The camera is a joke and the level design is worse than Halo 1. Yes, apparently it can be done.

When it comes down to it, little of all that matters, because this is an RPG, yet they've decided that the creatures should level up to always be a challenge the player. Completely against the entire logic of an RPG and leveling in one. Why level us up, drop new gear, or allow access to older areas if you've going to make the challenge the same all the way through?

Just say no, everyone.

Get Mercenaries 2 (although that appears to have disappointed as well), or Warriors Orochi or something. Seriously, Kingdom Under Fire : Circle of Doom is better than this, and that's saying something. Get that if you really need a hack and slash. At least the story in KUF:CoD is completely bonkers and not half way there like this.
[This review is based on another version of this product]
KrateroZ (1) on 03, Sep. 2008 18:44 (HKT)
Perfect for fans of this genre
Too Human is for fans of this genre (Action-RPG with loot hunting) fantastic - it has it's issues (camera), but it's a very addictive game with excellent art design and very good music.

And after playing through the singleplayer mode (appr. 12-15 hours) the game can be played in 2 player online coop mode for loot hunting ... I love this game! :)