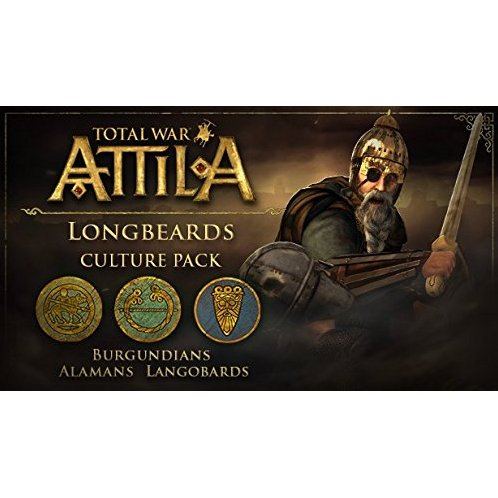 Region Free
This item will deliver instantly in your account. Some orders may be subject to verification by SMS or Voice which may cause delays.
US$5.38
Manufacturer
Sega
Compatible With Windows™ (PC)
Version

The Longbeards Culture Pack brings three new playable factions to Total War™: ATTILA. The Langobards, the Burgundians and the Alamans may be used in Single or Multiplayer Campaign modes and Custom and Multiplayer battles.

After centuries facing the threat of Roman dominance, these three formidable and warlike Germanic kingdoms are ready at last to sweep forth in expansionist campaigns from their tribal homelands. The Western Roman Empire lies to the South, her border territories weak and ripe for the plunder. With their unique blend of new buildings, battlefield units and faction traits, The Longbeards are poised to exploit the chaos of the age.

In history, these factions would go on to found some of the great empires of the medieval period. Will you marshal their might to forge those empires yourself?