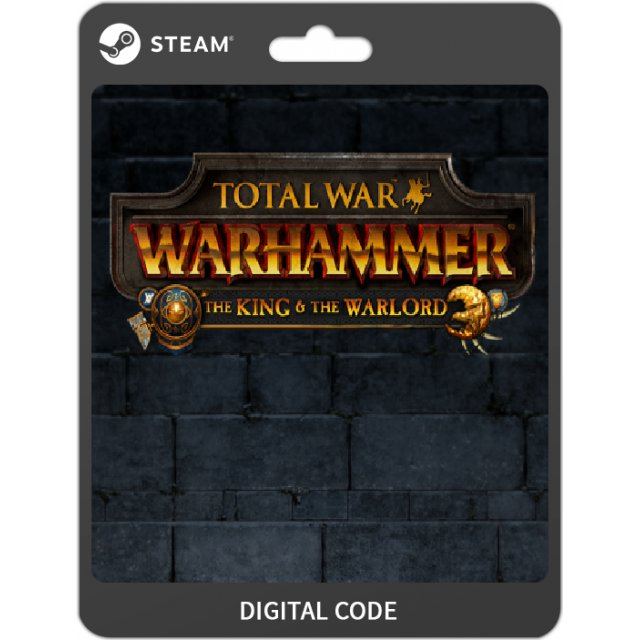 Region Free
This item will deliver instantly in your account. Some orders may be subject to verification by SMS or Voice which may cause delays.
US$8.32
Manufacturer
Sega
Compatible With Windows™ (PC)
Version

Region Free
Price
US$8.32
Play-Asia.com Return & Refund Policy
Click on a thumbnail to see more pictures for Total War: WARHAMMER - The King and the Warlord [DLC]

The King & The Warlord is the second Lords Pack for Total War: WARHAMMER. Bolstering the forces of both The Greenskins and The Dwarfs, it introduces famous rival characters, new iconic units and new battle maps from the world of Warhammer Fantasy Battles to your Grand Campaigns and Custom/Multiplayer battles.

The time is nigh for Clan Angrund to reclaim Karak Eight Peaks from the Grobi despoilers! Belegar Ironhammer, clan leader and a direct descendant of King Lunn, the last Dwarf to rule the ancestral hold, has inherited a bitter legacy of hatred and resentment. Even now he marshals his throng, making ready to strike out from Karak Izor. With the spirits of his fabled ancestors returned to fight by his side, Belegar will see his oaths fulfilled, and pass into legend himself.

Meanwhile, Skarsnik, the self-proclaimed Night-Goblin warlord of Karak Eight Peaks, has taken leave of the hold. On a squig-hunting excursion in the Grey Mountains east of Brettonia, he operates from his base at Karak Azgaraz when word reaches him of Belegar’s intent. Worse still, the tricksy Goblins minding Karak Eight Peaks have taken the hold in defiance of Skarsnik’s iron will. Intolerable, sneaky, mutinous gits!

Two legends, then: both hell-bent on claiming the ancient Dwarf-Hold for themselves. Their destinies entwined, The King and the Warlord must face one another in a final, desperate battle to determine the true ruler of Karak Eight Peaks.

Note: This content requires the base game ​Total War: WARHAMMER in order to play.

No reviews for Total War: WARHAMMER - The King and the Warlord [DLC] yet.