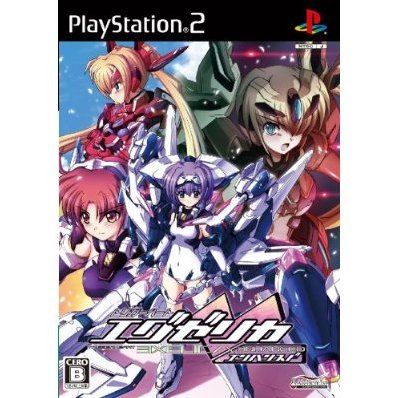 Alchemist
Compatible with PlayStation 2™ (PS2™)
For JPN/Asian systems only.

sold Out of print / Out of stock.
Manufacturer
Alchemist
Compatible With PlayStation 2™ (PS2™)
Version

Highly popular since its creation in 2006, the vertical shooting series is now out with a new game.Some place in a solar system so far away from the Earth that not even its light could reach our planet, a battle is reaching its end. Trigger Hearts, the androids created by the interplanntary defense organization has gained the upper hand against Varmis the battle group and chased them to the teleportation gates they have created for emergency uses.However, due to an error made during the teleportation, it's the trigger hearts which get sent to Earth. Heavily injured, the Trigger Hearts recovered and used Earth as their new base, and soon, the girls are living normal lives there. However, peace did not last long for Varmis has, too made their way across the galaxy to Earth. Under adverse circum stances, the opening of the teleportal gates and the time lag which the gates caused, the girls have to destroy the Varmis, hopefully, for good.2006年5月登場以来、全国アミューズメントスポットで人気を博した縦スクロールシューティングゲームです。魅力的なキャラクターたちと敵を振り回してなぎ倒す爽快感、プレイヤーの腕前に合った難易度のステージボスシステムにより、シューティングが苦手な方にも達成感を得やすい、新しいタイプのシューティングゲームです。

The Castle of Shikigami III / Shikigami No Shiro III
US$ 62.99

If you are familiar with Trigger Heart Exelica Enhanced, why not let others know?

The new features are nice but the original dreamcast plays better if you want arcade perfect quality.