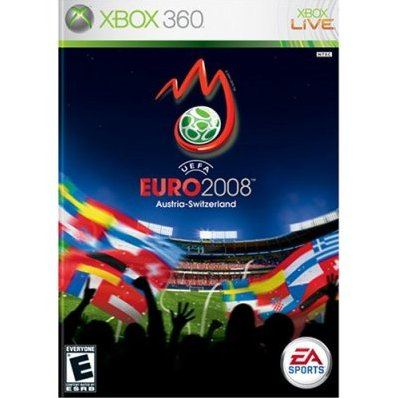 Electronic Arts celebrates the passion fans have for their national teams and all of the pageantry and excitement of the UEFA European Soccer Championship with the only official and exclusive licensed videogame of UEFA EURO 2008™.UEFA EURO 2008™ features the world's best players and teams and all of the official stadiums that will be part of UEFA EURO 2008™. Take on the challenge of leading one of over 50 European national teams to glory as UEFA EURO 2008 recreates all of the drama and excitement of the official tournament in Austria and Switzerland. Play as your favorite country from qualification right through to a virtual reproduction of the championship tournament.

[This review is based on another version of this product]
diego_saraiva22 (11) on 25, May. 2010 00:33 (HKT)
Great soccer game
This title is the best of the european soccer at your home.
[This review is based on another version of this product]
kagan06 (1) on 24, Sep. 2008 20:49 (HKT)
euro 2008
perfect game. UEFA EURO 2008 > fifa 2008
PuNiao (365) on 25, Jun. 2008 18:35 (HKT)
UEFA Euro 2008
Change the course of history and rverse the ignominy of England's 3-2 defeat to Croatia which kicked the "hree-lions" team out of the qualifying rounds in the recent Euro 2008.. Yes, you can be England's saviour when you play the latest soccer computer game, UEFA Euro 2008. That's because there's a "Story Of Qualifying" mode where you can relieve the highs and lows of the qualifying rounds. In the crucial England versus Croatia game (in which England needed only a draw to qualify), you start off just after the Croats slammed in their second goal to take an early 2-0 lead. Will you be able to dribble your way to fame and stop that third goal from the Coats which delivered the coup de grace to England's dismal performance? You can also control all your favourite - and hated - English players in the main UEFA Euro 2008 tournament if you played the full campaign which starts at the beginning of the qualifications. But you should probably go for a better team like Spain where you can control the twin terrors of Villa and Torres up-front or feel the footwork wizardry of Christiano Ronaldo when you take up Portugal. If you have a huge ego, try the Captain Your Country mode in which you control only a single player instead of the entire team and you can even create a new player from scratch and improve his skills with practice. Imagine the fans in the grandstand screaming out your name in blind devotion as you score a hat-trick with your left foot. You can even do your own "I-just-scored" jig - doing fist pumps and then stretching out your arms to the sky on bended knees. But heaven won't be able to help you get through this game. It requires plenty of skill. Don't even try to dribble your way past the defenders. I tried that during Spain versus Estonia and I still lost. You need to be able to pass accurately, pace your runs to maintain control of the ball and use the right player to score the goal. UEFA Euro 2008 plays a lot like Fifa 2008, which means the longer you press the shoot or pass key, the more powerful your shot will be. You also need to time your tackles well because mindless button mashing will only mean giving away penalties for free. However, you get to choose only from 52 European teams instead of the hundreds of clubs and international teams in Fifa 2008. There is also an interesting mode called Battle Of The Nations where you can play your country of choice via Xbox Live. Every single player or multiplayer game that you play gets you points for your performance. At the end of each day, your performance points are uploaded to a server together with the points of other players who have chosen the same national team. And when UEFA Euro 2008 ends on June 30, England might just be the Euro 2008 champion - at least online.
[This review is based on another version of this product]
skywirepteltd (1) on 20, May. 2008 12:22 (HKT)
EURO 2008 Review
EURO 2008 is undoubtedly a step forward for the FIFA series, bringing it tantalizingly close to dethroning the once all conquering PES. Play zips along with a responsiveness previously unseen in the series, helping it come closer than any other title to fully representing the beauty of the game of football – and all this wrapped up with some trademark EA presentation. As a companion piece to the tournament it’s unsurpassed, but as a halfway point between FIFA 08 and FIFA 09, and at full price, it's only the hardcore that need apply.