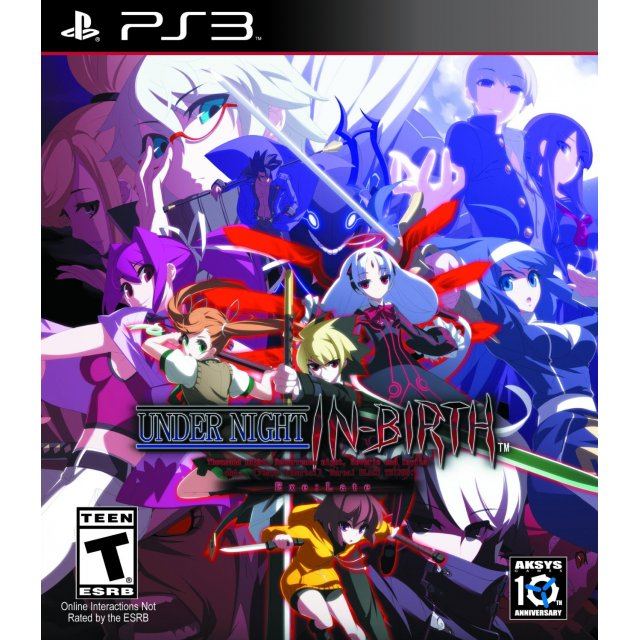 Aksys Games
Rated
By Our Customers
Compatible with PlayStation 3™ (PS3™)

sold Out of print / Out of stock.
Manufacturer
Aksys Games
Rated By Our Customers
Compatible With PlayStation 3™ (PS3™)
Version


Click on a thumbnail to see more pictures for Under Night In-Birth Exe: Late

Developer French-Bread is teaming with Arc System Works to bring its latest arcade title, Under Night In-Birth Exe:Late (UNIEL), to PS3 with tons of new upgrades and updates!

Under Night In-Birth Exe:Late will be sporting stylish and smoothly-animated special attacks along with a variety of easy-to-perform combos. If you hit the right ability execution you can even pull off the very aestetically-impressive Infinite Worth Exist move! UNIEL also includes a unique cast of characters, each possessing special abilities and weapons of their own! The biggest news coming out of the latest Famitsu is that we will be able to play the high school warrior Nanase! Rocking the stylistic oversized sword, her special attack is a spinning 'Windmill', staying out of her reach could get pretty difficult!

If variation is what you're after, you're in luck! UNIEL is packed with different game modes, ranging from offline battles like VSMode and Survival to online Ranked matches and training! For players who want to appreciate the artwork and the characters a bit more there is both a Cutomization Mode and a Gallery you can browse to your heart's content!

If you are familiar with Under Night In-Birth Exe: Late, why not let others know?

The English adapted text doesn't quite capture all of the Japanese voice-over humor, but it's great that they even bothered localizing a game that doesn't have as much exposure as other AAA famous franchises.

Highly recommended for fans of fighting games, Guilty Gear, BlazBlue, Persona 4 Arena.
tedward1 (2) on 24, Sep. 2015 05:19 (HKT)
No regrets with this
It's easy enough to pick up and button mash but has enough depth and higher skill cap characters to crank it up a notch
KOInsects (7) on 23, Sep. 2015 10:28 (HKT)
Easy and enjoyable
This is the first entry of an arc system works game that is easy to get along with and has tons of game modes, so you can spend lots of time unlocking and battling offline with a friend, highly recommended
1 »