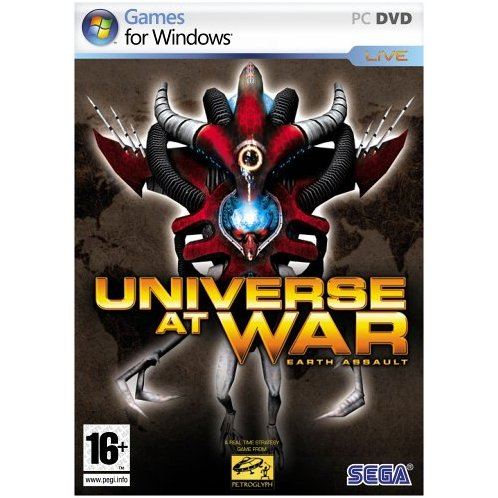 Universe at War: Earth Assault is the next sci-fi real-time strategy game from Petroglyph, the award-winning studio comprised of team members that developed the original Command & Conquer and C&C: Red Alert. The latest strategy game from these RTS pioneers features unprecedented levels of customization and an epic storyline set on near-future Earth.

Powerful forces from across the universe have brought war to our planet. In Universe at War, you take command of several unique factions with awesome powers and spectacular units. Control massive-scale alien war machines that are fully customizable. With "Tactical Dynamics," Universe at War's on-the-fly customization system, you can dynamically swap out weaponry, rework your tech tree, and retrain units in the middle of combat to thwart your foe and seize the advantage.

Universe at War features large-scale environmental destruction in a persistent world - level a city and when you come back, the area will still be a smoking ruin. Here, though, the environments you fight for are close to home, as you wage war across familiar Earth cities and landmarks.

If you are familiar with Universe at War: Earth Assault (DVD-ROM), why not let others know?

[This review is based on another version of this product]
inaka_rob (196) on 19, Oct. 2011 13:20 (HKT)
Sleeper hit!!
I love games like this (a sleeper hit) and I would never buy them or even find out about them if it wasn't for playasia and their sometimes awesome prices/deals. This game is a fun, balanced RTS game. Their are problems. It can be a little clunky at times, but I would not blame the controls. It is hard to bring an RTS to consoles and I could not name a single RTS on consoles that has "better" controls. Maybe Halo Wars, but Halo Wars was also not as deep as this game, not that this game is particularly deep, its just that Halo Wars is a [fun but] shallow RTS. In one of the other reviews here on playasia they mention the camera is too close. Maybe they did not know you could control the camera zoom with the right stick. The game does have very noticeable slow down, like 5 fps when you have 100 units on screen at once. You can still play but its disappointing to have such noticeable frame rate problems when the action gets thick. I would say this game is a little bland, but next to Star Wars RTS, C&C, Starcraft, Halo Wars, what other RTS isnt bland? It still has all the ingredients to make an enjoyable RTS experience (on consoles) and has one or two new features that are pretty cool (like transporting your troops through your conduit complex).
[This review is based on another version of this product]
wastedboy (24) on 02, Nov. 2009 18:43 (HKT)
A decent RTS on consoles.
One of the best efforts of bringing a RTS for the consoles. A bit clunky controls and the camera is too close but with a couple of good friends a very enjoyable multiplayer experience.