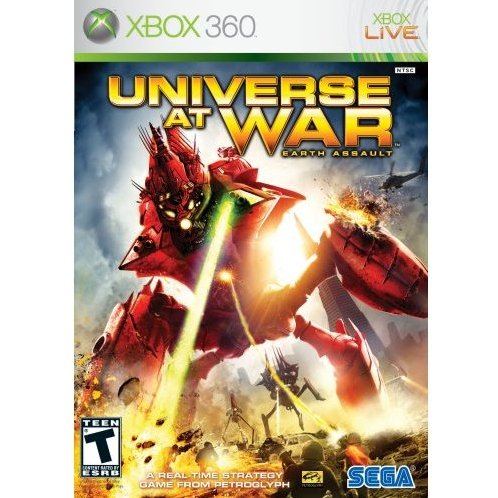 Works on all systems sold worldwide, a correct regional account may be required for online features.
1-2w Expected stock arrival within 1-2 weeks.
US$44.99
Manufacturer
Sega
Compatible With Xbox360™ (X360)
Version

Works on all systems sold worldwide, a correct regional account may be required for online features.
1-2w Expected stock arrival within 1-2 weeks
Price
US$44.99
Play-Asia.com Return & Refund Policy
Click on a thumbnail to see more pictures for Universe at War: Earth Assault

Universe at War: Earth Assault is the next sci-fi real-time strategy game from Petroglyph, the award-winning studio comprised of team members that developed the original Command & Conquer and C&C: Red Alert. The latest strategy game from these RTS pioneers features unprecedented levels of customization and an epic storyline set on near-future Earth.

Powerful forces from across the universe have brought war to our planet. In Universe at War, you take command of several unique factions with awesome powers and spectacular units. Control massive-scale alien war machines that are fully customizable. With "Tactical Dynamics," Universe at War's on-the-fly customization system, you can dynamically swap out weaponry, rework your tech tree, and retrain units in the middle of combat to thwart your foe and seize the advantage.

Universe at War features large-scale environmental destruction in a persistent world - level a city and when you come back, the area will still be a smoking ruin. Here, though, the environments you fight for are close to home, as you wage war across familiar Earth cities and landmarks.

No reviews for Universe at War: Earth Assault yet.