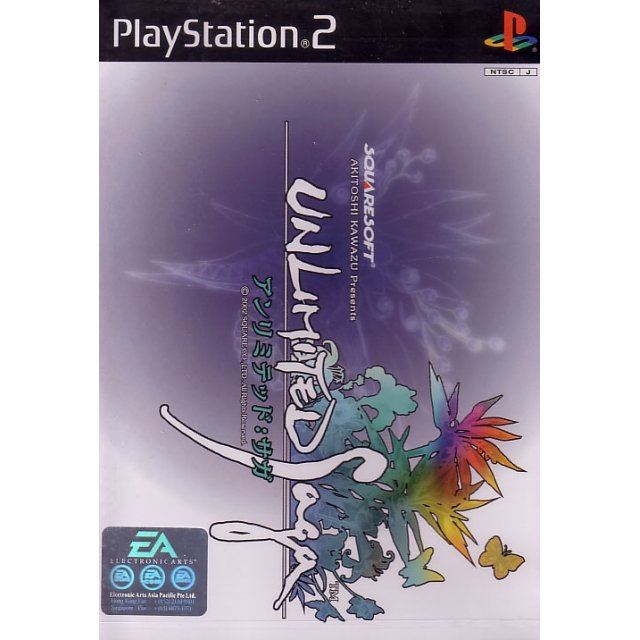 sold Out of print / Out of stock.
Manufacturer
Square Enix
Compatible With PlayStation 2™ (PS2™)
Version


Click on a thumbnail to see more pictures for Unlimited SaGa

Unlimited SaGa bases the story around a handful of varying characters, as does its predecessors. There are eight characters altogether, excluding the main heroine whom is an ex-pirate going by the name of Laura. The other eight characters have their separate roles and inclusions in the story at certain intervals, being sure to keep the gameplay fresh and paced. The setting for the majority of the game is a mysterious, un-explored country that holds seven magical crystals. These crystals are said to hold mythical powers that when un-leashed will lead the releasers into a new age.

Each of the eight differing characters has a different visual presentation that is based around flowers. This may sound a little "girly" and as though it should not be exposed to the butch, masculine men that we are, but behold, as this concept appears very interesting. Each character is made up of a combination between a single flower and color giving all you horticulturists a bit of a tease and something to look out for. Expect Unlimited SaGa to be similar in essence when compared to Saga Frontier 2 on PSOne.

If you are familiar with Unlimited SaGa, why not let others know?

Anonymous on 26, Dec. 2004 01:07 (HKT)
Out of the norm
The art style looked intersting in this game so I tried it out, but after my first battle, I thought this game was horrible and got a refund. The revolutionary battle system and adventuring method is too different for the casual gamer and even for a hardcore RPG player like me.
Anonymous on 20, Dec. 2004 05:36 (HKT)
Intersting
This game is one of those things that grow on u. At first i had to force my self to play it. The more i played and the farther i got the more i was drawn into the story square-enix had created. The graphics are very differnet and strange. None the less its a fun and differnet game. Only buy this if u are rdy for a very differnet kind of game
rafaelparolini (3) on 19, Feb. 2004 20:55 (HKT)
weird but great
This game is absolutly strange, but for those with an aquire taste...buy it. They attempted to revolutionise the battle system and game play. even though it may not have worked, this is a piece of collection not to miss.