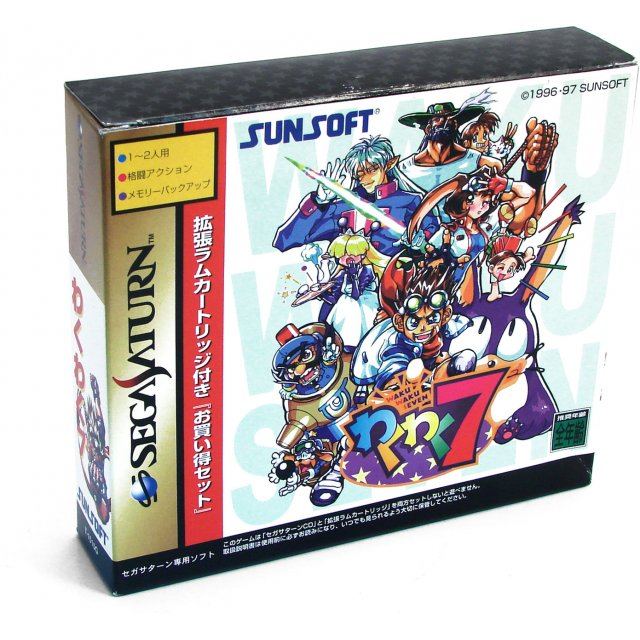 Sunsoft
Compatible with Sega Saturn™ (Saturn)
For JPN/Asian systems only.

The seven magical Waku Waku balls have surfaced once again and the few that know of their existence decide to battle against each other in order to collect them all. If they are able to defeat the powerful monster enslaved in them, the Waku Waku balls will grant the lucky victor whatever wish they desire.

The game was created as a parody of animé series in general, WW7 pools together all the mainstays of the genre and has them fight against each other. From furry catgirls and effeminate, super-cool elfs to cute pokemon-like creatures and dumb and loud heroes.

Gameplay-wise the game is a 2D fighting game in which two characters try to defeat each other in one-on-one combat using their attacks and special moves. The player selects his/her character and then tries to defeat all opponents in succession. As in most games of the genre each character possesses individual strengths and movesets, plus a power-bar that gets charged by unleashing special moves that allows one to trigger super moves and even unblockable attacks at the expense of power slots.

Features arcade and Vs gameplay modes as well as an artwork gallery for the Saturn version which showcases the bright colorful art design of WW7.

If you are familiar with Waku Waku 7 (w/ 1MB RAM Cart), why not let others know?

justicedude (2) on 18, Aug. 2010 02:33 (HKT)
Okay port of a great game.
Waku Waku 7 on the Neo Geo is an amazingly good fighter that has never recieved the recognition it deserves.

Waku Waku 7 on the Saturn is an okay port of an amazing fighter. The backgrounds are extremely pixelated, the voice samples sound poor, and there is a great deal of on-screen slowdown during fights. It's playable, but frustrating.
MarvellousM on 05, Aug. 2004 00:07 (HKT)
Waku Waku 7 ROCKS!
I\'ve played the arcade version and if you\'re into wacky Japanese games that are full of zany characters, this one is for you. Even better, it plays like a dream and is a great fast-paced fighter with some great moves, graphics, and some excellent BG music. One for you obscure game fans for sure.