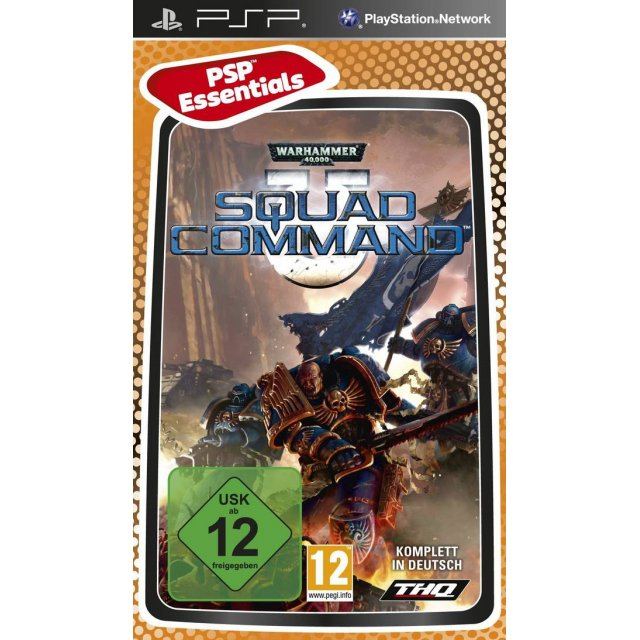 sold Out of print / Out of stock.
Manufacturer
THQ
Compatible With Sony PSP™ (PSP™)
Version

Warhammer® 40,000™: Squad Command™ marks the first time that the brutal, war-ravaged world of the Warhammer 40,000 universe will be playable on the PSP® system. Warhammer 40,000: Squad Command features fast, action-packed combat through turn-based strategy and an engaging, authentic single-player storyline. Gamers play as the elite Space Marines of the Ultramarines chapter and strive to combat the encroaching evil of the ruthless and daemonic influenced Chaos Space Marines through 15 cinematically-tied missions. With a robust multiplayer mode featuring 9 unique missions, gamers will team up and go head-to-head with other gamers worldwide as either the Imperium of Man or Chaos Space Marines, ensuring hours of unique replayability. Warhammer 40,000: Squad Command will also fully utilize all the portable functionality of the PSP, bringing the Warhammer 40,000 universe to life on handheld.

If you are familiar with Warhammer 40,000: Squad Command (PSP Essentials), why not let others know?

[This review is based on another version of this product]
hall_of_silence (24) on 24, Sep. 2013 19:37 (HKT)
Barebone.
For Warhammer fans only, the strategy is pretty thin and the gameplay average. For its price point its definitely worth a spin for anyone into the Warhammer but casual should avoid.
[This review is based on another version of this product]
x (34) on 27, Nov. 2007 16:53 (HKT)
warhammer 40,000: squad command
i\'d only recommend this if you are either a strategy player or a warhammer fan. graphically, the game is great, especially the environments. but, you\'ll find little support by way of the manual or in-game tutorial. the manual is little better than a pamphlet, and the in-game tutorial warps by in on-screen text without giving you related objectives to try out the functions being described. once you get past that and into the game, there are some interesting elements - the destructible terrain and the squad-based gameplay. but the controls are mapped out counter-intuitively so that the analog nub controls the camera, while the d-pad is used for selecting units and moving around the map. it takes getting used to, to say the least. i\'m several missions along, and enjoying the game more now that i\'m used to all its quirks, but expect a lot of frustration when getting into this experience the first few times...