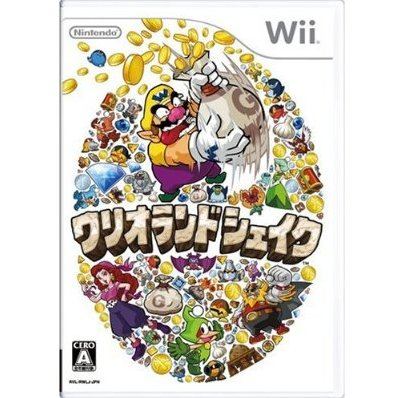 A classic side-scroller for the Wii console stars Wario, the smelly, bad-mannered alter ego of Mario. With the Wii Remote controller turned sideways like an old-school controller, veterans and newcomers alike can run, jump and smash their way through hectic side-scrolling stages. Players shake the Wii Remote to help Wario take down his enemies, empty bags of treasure or cause earthquakes. Best of all, there are numerous stages each offering multiple missions to keep players coming back again and again to unlock everything, collect more coins or just improve their best times.

Dungeon Explorer: Meiyaku no Tobira
US$ 7.99

If you are familiar with Wario Land Shake, why not let others know?

tw0080 (3) on 25, Apr. 2011 17:42 (HKT)
Beautiful game.
One of the best looking 2D side scrolling game on the Wii, if you like classic act game, you can never go wrong with this one.
[This review is based on another version of this product]
rasdiggle (40) on 09, Feb. 2011 01:10 (HKT)
AWESOME PLATFORMER/PUZZLE
Great animations and gameplay combine into one fun game great for all ages.
[This review is based on another version of this product]
Odie (466) on 09, Dec. 2010 09:14 (HKT)
Gorgeous Wario Game
Wario Land: Shake It! is a nice platforming game with great graphics & animation. The gameplay is your old school 2D platforming game, nothing that you have not seen before. The difficulty levels are challenging but not overwhelming so thats a plus point. Overall, a short & sweet game. A good buy with the price available from PlayAsia.
[This review is based on another version of this product]
danualwaysplay (568) on 15, Sep. 2010 18:15 (HKT)
Great
I always like 2D side scrolling game
[This review is based on another version of this product]
PuNiao (365) on 17, Oct. 2008 14:10 (HKT)
Shake it till you make it
This game is rendered beautifully in meticulous 2D hand-drawn graphics - a rare thing these days. Wario, a ridiculous-looking anti-hero to Mario, stars in this traditional side-scrolling platform adventure where he crosses treacherous chasms and frisks enemies to find a bottomless coin sack that spits out coins when shaken. Controls are an intuitive mix of old-school elements and new. You hold the Wiimote sideways, using the directional pad as well as the 1 and 2 face buttons to move and dash and jump respectively. There are also context-sensitive actions, which are performed by shaking or tilting the Wiimote. For instance, you could summon all of Wario's strength into one stupendous effort by giving the Wiimote a short, sharp shock. Or when you find a sack of silver, shake your new-found booty to unleash a massive shower of coins. You can also aim cannons and other such weapons and machinery by tilting the Wiimote, an action which doesn't produce very accurate results. However, it's not as if this tiny setback in the controls will mess up your chance of winning. Apparently, the game's difficulty level is made with the aged-12-and-above group in mind. Afraid you might fall off a set of invisible platforms that you need to cross? Worry not - their exact positions have been marked with floating coins. See a switch you can't reach? Look nearby for a ball that you can hit it with. In later levels, the ball is replaced by a hapless enemy whom you can stun, pick up and throw. At the advanced levels, though, the enemies fight back. Every now and then, the game does offer something that won't put regular platforming adventurers to sleep. For instance, the escape sequence at the end of every level will have you dodging and diving through obstacles at top speed, a la Sonic the Hedgehog. Just be advised: Wario Land: Shake It! is designed for the casual crowd despite what its old-school visuals and gameplay suggest.