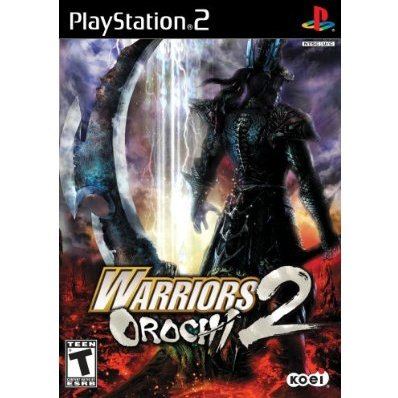 sold Out of print / Out of stock.
Manufacturer
Koei Tecmo Games
Compatible With PlayStation 2™ (PS2™)
Version

Shattering time and space, the venomous Serpent King Orochi kidnapped the DYNASTY WARRIORS and SAMURAI WARRIORS in scheme to test his might. The heroes eventually defeated Orochi and his menacing army. While the slain Orochi lies in the netherworld, a mysterious alliance is hatching an otherworldly plan so that the Serpent King may rise again. Now a new group of fighters must join forces with history's greatest warriors in an effort to stop this evil resurrection.WARRIORS OROCHI 2 takes place after the events of the original game. The game's main "Story" mode features storylines for the kingdoms of Wu, Wei, and Shu, and the SAMURAI WARRIORS, while a new Orochi storyline looks back to the first series of wars to expose some of the Serpent King's secrets.

If you are familiar with Warriors Orochi 2, why not let others know?

cnepos1 (60) on 23, Dec. 2012 12:27 (HKT)
Great series.
I originally missed out on the PS2 version when it first came out. However, despite having finished both the PSP and Xbox versions, I still decided to get this one. It's still fun after all this time.

Get this game if you like any of the other 'Warrior' games. You won't regret it.
Joel (5) on 22, Oct. 2008 19:04 (HKT)
If you happen to owned a Warriors Orochi 1 game, or prehaps you played Dynasty warriors or even Samurai Warriors , this is a game you definitely want to get. Not only it has better graphics, the story and sound effects also enhances.

When playing on the television,be it using a PS2 or XBOX 360, it will definitely bring the game to life before your very eyes.
[This review is based on another version of this product]
darkwolf_28 (13) on 04, Sep. 2008 12:19 (HKT)
A MUST for Musou Orochi lovers with HDTVs & XBOX 360s
For some of us that owns a Sixth generation consoles such as a PS2 & are playing it on HDTVs, graphics may look stretched & a bit fuzzy because of the 480i resolution. But if you also own a XBOX 360 & love but haven't bought the Musou Orochi Sequel on the PS2 yet, then buy this game for you XBOX 360.

Playing this game with your HDTV, you'll enjoy it in clear & vibrant resolution 720p.