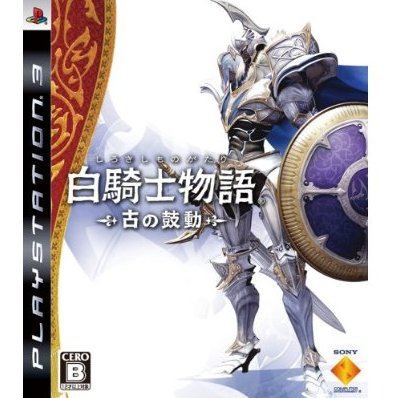 Works on all systems sold worldwide, a correct regional account may be required for online features.
1w Expected stock arrival within 1 week.
US$40.99
Manufacturer
Sony Computer Entertainment
Rated By Our Customers
Compatible With PlayStation 3™ (PS3™)
Version

White Knight Chronicles is an RPG that makes use of orthodox elements such as a fantasy setting with armors, princesses and heroes. Varandol, a peaceful country possesses a mysterious and powerful artifact, The Knight. Lusting after its power, a secret organization called The Wizard invaded the country on the Princess Sisna's coming of age ceremony.

Our unassuming hero, a novice wine merchant Renardo stepped in just in time to rescue the princess and together they escaped into underground. There the youngsters discovered the White Knight, the object of the Wizard's desires. Without really knowing what happened, Renard merged with the armor and pushed the secret organization back.

But before being completely chased out, the Wizards abducted the princess. To finish what he started, Renardo set off to rescue her and to discover the secrets behind the Knight and the organization.

Magic is combined with real time combat, pick up your sword and walk the path of knighthood.

If you are familiar with White Knight Chronicles, why not let others know?

SK (101) on 07, Sep. 2009 20:39 (HKT)
No title
This game plays very much like a MMO even in offline mode with a battle system and layout that bares some similarities to FF XI/XII. The graphics are somewhat mediocre for PS3 but the designs of the knights and several of the monsters are impressive, even if the variety in monsters is lacking.

The story is a little weak and bland with even the twists and turns being quite predictable. It also doesn't help that upon completion, you discover that the story is in fact incomplete and now we must wait for the sequel to find out what will happen next. As a result, because of the story being left in limbo the development of the characters are also half-baked.

The strength in this game probably lies in its online mode. Offline, it is quite a short game and can be completed within 30 hours, it's the online component that may greatly add to the replayability though even then, the online quests are somewhat repetitive in nature.

Overall, it's not a bad game, die-hard RPG fans are likely to get some enjoyment out of it and at the right price, I would still recommend it though it isn't without its share of shortcomings.
Everest (12) on 07, Sep. 2009 20:29 (HKT)
Try this one if you have passion about
This game is some what like monstor huntor type game with the system that you have to attack certain monstor in order to collect certain material for making certain weapon, iteam, arm, or accessories.

It has a story, not long, not short, just about the right length. Yet, the story is some what not truely finished. Which makes all the players thinking about there may be a second version, a continuous story.

The quest system is special. Interesting quests with numerous types of mission and starting from Geald Rank 7, preety much all the missions are not able to be finished just by yourself; you MUST link to GeoNet to work with other players to finish the quest. Plus, it is updated periodically since 2008. Until now, there are more then 15 missions been added to the game and all of them are downloaded to your system automatically and freely once you connect to the Internet.

Anyway, if you like to play RPG, collection of materials for making things, medieval stories with a fantasy of able to trans form, and freely settle the way of attacking your enemies, YOU GOT TO TRY THIS ONE!!! This game was released in early 2008 but I did not pay attention to it until the end of 2008 and I liked it soon after I new its system.