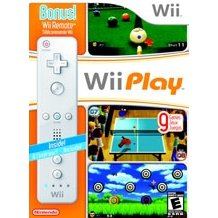 Bundled with a Wii Remote, Wii Play offers a little something for everyone who enjoyed the pick-up-and-play gaming of Wii Sports.Wii Play is made up of nine games that will test the physical and mental reflexes of players of all ages. Whether you pick up the Wii Remote to play the shooting gallery that harkens back to the days of Duck Hunt or use it to find matching Miis, a world of fun is in your hands!In addition to the shooting gallery and Mii-matching game, Wii play offers billiards, air hockey, tank battles, table tennis rally, Mii poses and a cow-riding race.

If you are familiar with Wii Play with Remote, why not let others know?

But the fact that you get a remote in addition to the game makes this so much more worth it. So, unless you already have 4 wiimotes, you should seriously consider this as your next purchase.

All the games, while very basic, can be a lot of fun. Many think they aren\'t in depth enough and get old quick. I guess that\'s true since I only play about half of them on a daily basis. The medal system (like in Wii Sports) makes you want to keep playing until you achieve that platinum, though.

Again, like Wii Sports, the games are horribly repetitive, but fun. And you can\'t go wrong with multiplayer. Here\'s a quick run-down of my feelings for each game:

Shooting - Fun at first and reminiscent of Dunk Hunt. However, you soon realize it\'s the same game over and over again with very little variation in target patterns. Multiplayer can be fun, though. Also, you can play single player with two \"guns,\" which does open it up for more of a challenge!

Find Mii - My least favorite of all the games. All you do is try to match pairs of Miis, locate the mii you\'re using, find the one running the fastest, etc. As you play more levels, there are more and more miis on screen at once to look through and you\'re timed throughout it all. The trick is to make plenty of easily identifiable Miis (different colored hats and big sunglasses really help) to reach that platinum medal.

Table Tennis - I heard many were upset over this one more than any other. I can see why. I guess people were expecting something like Wii Sport\'s Tennis. But why make it like Tennis when there\'s already a tennis game? It plays much more like Pong, in a sense. Instead of swinging the paddle, you simply move the remote back and forth to bounce the ball back. To make the concept easier to understand, the paddle is the wiimote\'s cursor.

Pose Mii - Again, this one is less than thrilling. Your Mii can do one of three poses which you can switch between using the A and B buttons. There are these bubbles with a silhouette of one of those poses in them. You have to match poses to the bubbles to pop them. As you progress, the bubbles appear faster and the variation in poses increases. The goal is to not let the bubbles touch the bottom of the screen.

Laser Hockey - This one looks more like Pong than Tabble Tennis, but plays more like digital air hockey. In fact, you can even change your paddle to one that resembles an air hockey paddle by pressing A+B at the beginning of the match. The AI isn\'t the greatest in the world and it doesn\'t really get any harder as time goes on, but the goal is to score as many points as possible before time runs out. This is another one that really excels in two player.

Billiards - Probably the one I\'d really like to see a \"real\" game made out of. It\'s simple and accurate and just loads of fun. The physics are pretty impressive, but not totally spot-on. The only complaint I have is that you can\'t shift the camera to the side to better line up shots, your view is always directly behind the cue ball. An overhead view can be activated, though, which helps.

Fishing - Probably my biggest disappointment. After playing fishing in Zelda, this ones just doesn\'t compare. All you do is lower the hook in the water and wait for a bite. The more you catch, the more points you get.

Charge! - Nothing too exciting or difficult to master here. I suppose it could be more fun in two player, but I haven\'t tried that yet. All you really do is run over scarecrows and jump hurdles as fast as you can. Control is all done by tilting the wiimote, no buttons at all.

Tanks! - This is the one that really got me hooked first. Not only is the game plain fun, but the way they presented it is brilliant. Instead of \"real\" tanks and all that, they are depicted as toy tanks and the walls are all wooden blocks. I don\'t know why, but that really adds to its charm. You\'re given unlimited ammo which will bounce off walls once, which means you can rebound shots around corners to destroy your enemy. You can also lay mines which are set off when shot, run over, or after a time delay. As you progress, the enemies you encounter will be faster, have better ammunition, be better at dodging, etc. The game ends when you run out of lives (you start with 3 and gain 1 every 5 levels). Two player is a blast as well. Instead of going head to head, it\'s more of a co-op game to see who can kill more enemy tanks than the other.

The games I think really make it are Tanks!, Billiards, Laser Hockey, and Shooting. All of them are put together very well, play very solid, and look beautiful. Obviously, they could be a lot better and more in depth, and hopefully developers will see these and use them like a stepping stone to make more advanced games with a similar feel. Much like now there\'s a more realistic bowling game coming out.

Overall, Wii Play is worth the money and can be lots of fun, especially with another player. You may find yourself bored of some of the games quickly, but there\'s sure to be one or two you can\'t get enough of. If nothing else, get it for the extra wiimote. Even an hour of fun from Wii Play is worth that little extra money spent.