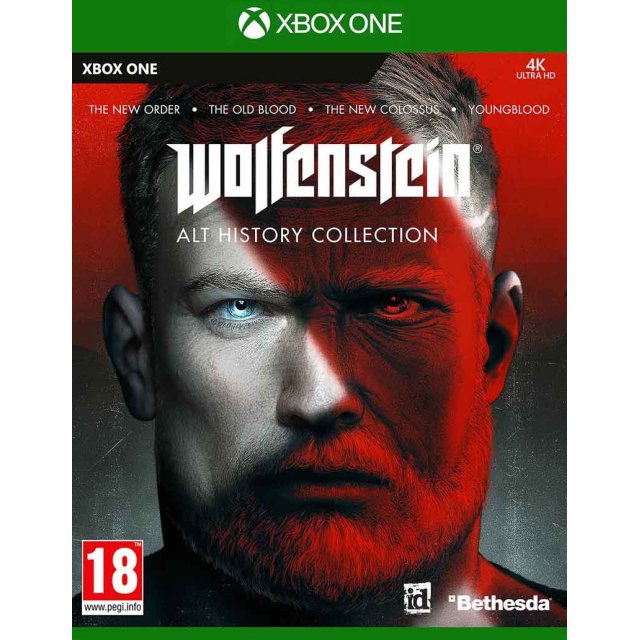 Works on all systems sold worldwide, a correct regional account may be required for online features.
Expected Stock Arrival 12/11/20
US$32.99
Bethesda
Compatible With Xbox One™ (XONE™)
Version

The Wolfenstein Alt History Collection takes players on an epic adventure through a grim alternate history where Nazis have achieved global domination. Shoot, stab and kill your way through the Nazi ranks in four critically acclaimed games in the Wolfenstein franchise.

The Alt History Collection lets you experience a sprawling interconnected narrative that spans more than three decades of action-packed Nazi killing and unforgettable characters. From war-torn Europe in the 1940s to 1960s Nazi-occupied America, to the fascist infested streets of 1980s Paris – strap in for a heart-pounding adventure as you forge new alliances and rally fighters to push back the Nazi war machine.

Assume the role of super soldier BJ Blazkowicz as he uses elite combat tactics and an arsenal of uber advanced weaponry to take down the most powerful empire the world has ever known. Join forces with a band of dedicated resistance fighters and launch an offensive battle that spans the globe and beyond, as you seek to uncover the truth behind how this regime conquered the world so quickly. Take on massive mechs, super soldiers, and an army of seemingly unstoppable might as you fight to free the planet from a nightmare of unimaginable tyranny.

Is a standalone prequel to the critically acclaimed first-person action-adventure shooter, Wolfenstein: The New Order. The adventure, which spans eight chapters and two interconnected stories, features the hallmarks of MachineGames - thrilling action, immersive story, and intense first-person combat. As a war hero, BJ Blazkowicz, arm yourself with new weapons such as the bolt-action rifle and grenade-launching Kampfpistole as you attempt to thwart the advancing Nazi war machine and take advantage of duel-wielding pipes that can be used for wall climbing - or for vicious take-downs of never-before-seen Nazi adversaries.

America, 1961. Your assassination of Nazi General Deathshead was a short-lived victory. Despite the setback, the Nazis maintain their stranglehold on the world. You are BJ Blazkowicz, aka “Terror-Billy,” a member of the Resistance, the scourge of the Nazi empire, and humanity’s last hope for liberty. Only you have the guts, guns, and gumption to return stateside, kill every Nazi in sight, and spark the second American Revolution.

Note: Games comes with (2) Two CD's and (1) One Code for
Wolfenstein: The Old Blood and Wolfenstein 2: Youngblood

No reviews for Wolfenstein: Alt History Collection yet.