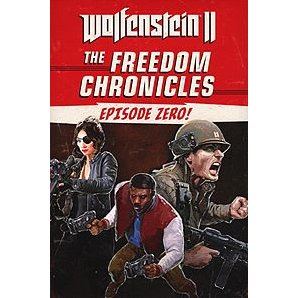 sold Out of print / Out of stock.
Manufacturer
Bethesda
Compatible With Windows™ (PC)
Version

The time has come to once again refresh the tree of liberty with the blood of patriots and tyrants. Nazis have overrun the world, and while BJ Blazkowicz is busy igniting a new revolution in America, other freedom fighters are waging war on their own fronts. Soon you can step into the brave soles of a former football player, an assassin and an Army captain, and battle to restore the soul of America in Wolfenstein II: The Freedom Chronicles. Starring a trio of larger-than-life heroes, The Freedom Chronicles includes three DLC packs:

The Adventures of Gunslinger Joe– As former professional quarterback Joseph Stallion, smash through Nazi hordes from the ruins of Chicago to the vastness of space!

The Diaries of Agent Silent Death– As ex-OSS agent and assassin Jessica Valiant, infiltrate Nazi bunkers in California and discover the secrets of Operation San Andreas!

The Amazing Deeds of Captain Wilkins– As the US Army’s renowned hero Captain Gerald Wilkins, embark on a mission to Nazi-controlled Alaska to dismantle Operation Black Sun!

No reviews for Wolfenstein II: The New Colossus - The Freedom Chronicles: Episode Zero [DLC] yet.