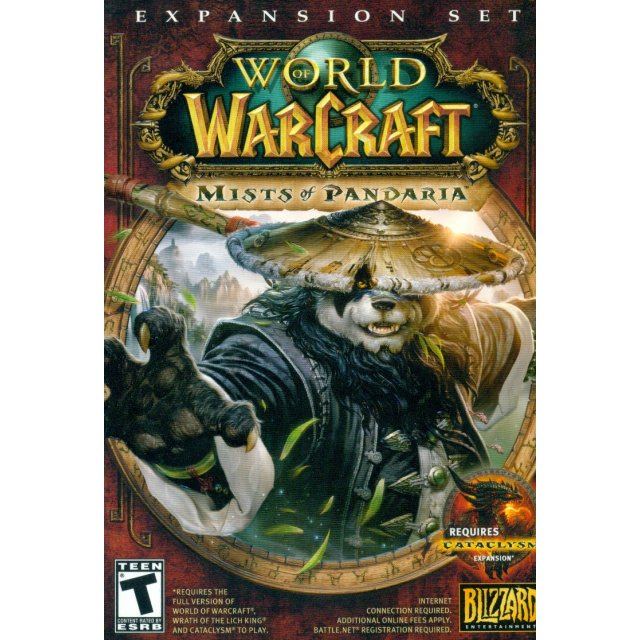 US
5-15d Expected stock arrival within 5-15 days
Price
US$44.90
Play-Asia.com Return & Refund Policy
Click on a thumbnail to see more pictures for World of Warcraft: Mists of Pandaria (DVD-ROM)

Alliance warships prowl the seas. Horde armies thunder across Kalimdor. Tensions between these factions edge closer to erupting in a savage war that threatens to consume all of Azeroth. Against this backdrop of impending conflict, an uncharted island mysteriously appears...
Shrouded in fog since the world was sundered more than ten thousand years ago, the ancient realm of Pandaria has remained unspoiled by war. Its lush forests and cloud-ringed mountains are home to a complex ecosystem of indigenous races and exotic creatures. Will the mists of Pandaria part to reveal the world's salvation… or will the battle to control this breathtaking new land push the Alliance and the Horde over the brink into total annihilation?
Blizzard Entertainment's Mists of Pandaria™, the fourth expansion for World of Warcraft®, unveils an entirely new continent for players to explore and reintroduces the enigmatic pandaren as a playable race. All but the bravest pandaren explorers have been hidden from the world for thousands of years. Now, in the aftermath of the Cataclysm, Pandaria's heroes are stepping forward to declare their allegiance to either the Alliance or the Horde.

Mists of Pandaria also introduces an exciting new player class: the monk. Pandaren masters will share the extraordinary secrets of their ancient martial arts with members of both the Alliance and the Horde. Depending on how they choose to channel their chi energy, monks can be effective at dealing damage, tanking, or healing.

Even more content and features await as players journey to the new level cap of 90, including flexible scenarios for smaller bands of adventurers, challenge modes for fearless dungeoneers, and strategic companion pet battles for your pint-sized pals.

If you are familiar with World of Warcraft: Mists of Pandaria (DVD-ROM), why not let others know?

azzmode (2) on 08, Dec. 2012 13:02 (HKT)
Family, Friends & Family.
Well, I got to say this expansion isn't what I expected it to be. I quit halfway in Cataclysm & was all worn out by the raiding and all that comes with it. Since I have been playing WoW from the beginning I thought I would give this expansion a try.

There could have been a better story line to bring to an expansion. Well, that is what I thought... I have reached Level 90. All I gotta say is: WOAH! it is awesome. There are tons of stuff to do and the way the pandas are connected to the story line is awesome.

To anyone who quit saying that this expansion is bleh because pandas and blah blah, should try it out. It really is different and fun.
andrescapo_ (177) on 25, Oct. 2012 08:21 (HKT)
This brought me back after quitting
I have to say, I played WoW for over 4 years, and I quitted 5 months before this expansion came out. As I already have the whole I decided to give it a try, and man, the new world is a fresh new way to play the game.

Even though its basically the same, the world follows a more strict story, with several cutscenes and a variety of quest tasks. Of course, you will still do the classic "bring me x of this" or "kill x of these", but often you get into more varied tasks, such as training your focus to break materials like a martial artists and then use it to defeat a giant bug, ride a giant monster to stomp enemies, sneak around to bomb a cave, snipe enemies with a rifle, and so on.

I just leveled my main, so I don't know how repetitive it will feel when I get to level my alts, since I will be doing the same exact stuff. This time, you visit pretty much every Pandaria zone to get to max level, you don't exactly get to choose between different areas.

I still have to try the raids, but the dungeons are interesting enough.

The new world is filled with dailies, and some of them involve planting and harvesting crops, that take one day to grow before being able to harvest them, giving out valuable materials for cooking that you can't get any other way (at least not for a low price).

I'm really enjoying the new content, just be warned, that if you want to do everything you will need a lot of free time, since the reputations this time are much more important than just some vanity rewards.