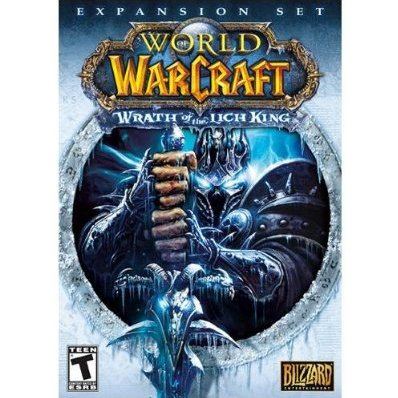 World of Warcraft: Wrath of the Lich King Expansion Pack

Blizzard
Rated
By Our Customers
Compatible with Windows™ (PC)

sold Out of print / Out of stock.
Manufacturer
Blizzard
Rated By Our Customers
Compatible With Windows™ (PC)
Version


Click on a thumbnail to see more pictures for World of Warcraft: Wrath of the Lich King Expansion Pack

The Lich King Arthas has set in motion events that could lead to the extinction of all life on Azeroth. With the armies of the undead and the necromantic power of the plague threatening to sweep across the land, only the mightiest heroes can oppose the Lich King's will and end his reign of terror for all time.Blizzard Entertainment's latest expansion to World of Warcraft – Wrath of the Lich King – adds a host of epic content to the existing game world. Players will achieve soaring levels of power, explore a vast new continent, and battle other high-level heroes to determine the fate of Azeroth.

World of Warcraft 60 days Time Card Prepaid US digital
US$ 26.99

World of Warcraft Atlas: Wrath of the Lich King
US$ 19.99

If you are familiar with World of Warcraft: Wrath of the Lich King Expansion Pack, why not let others know?

andrescapo_ (177) on 05, Jan. 2014 09:17 (HKT)
This one was the best Expansion
Today the content in this expansion is obsolete and its just a bump in the way to the current expansion, but back when this was the newest it was the best.
I liked all the raids and got to experience top end Heroic raids for the first time, even in a not so hardcore raiding guild.

and playasia.com makes it possible, easy and at reasonable price to revisit this amazing world from regions i thought would never be able to play this game. thank you
denishvega (13) on 24, Apr. 2010 22:05 (HKT)
Best Expansion
Best expansion for you where to takes the wow experience to next level. So much fun can buy in playasia.com. Great!
1 »