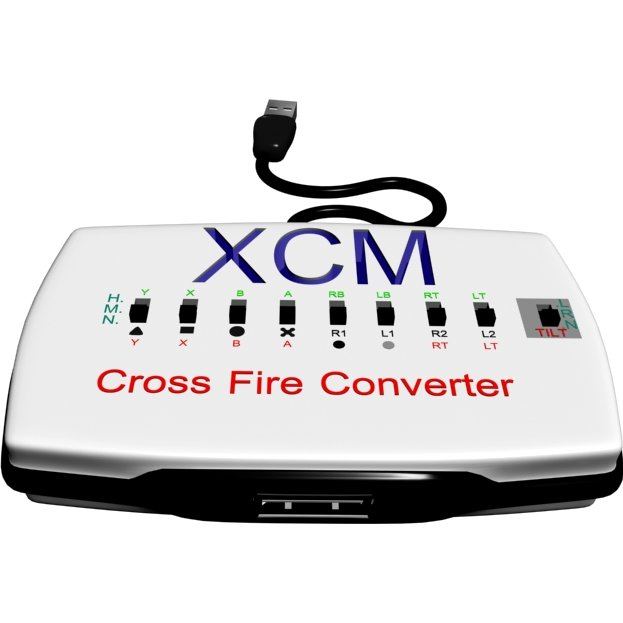 The XCM Cross Fire adapter lets you connect your PS3™ controller to your Xbox 360™ console. With built in rapid fire / turbo,and tilt functions, this adapter is the ultimate in Xbox 360™ accessories. This adapter is also compatible with the Xbox 360™ and Original Xbox™ wired controllers for added Rapid Fire / Turbo functionality.

If you are familiar with XCM Cross Fire Converter, why not let others know?

damstchet (5) on 02, Jul. 2011 03:55 (HKT)
xcm
Good product, but it's a pity that it is necessary to re-configure the xcm with a wired xbox lever 360 for definir the port(bearing)
benclinkingbeard (1) on 09, May. 2011 06:01 (HKT)
XCM Crossfire does not work
I spent that much money on a white box that has a light, i can now use it for a nightlite , i cant get it to do anyhting until i get help , can anyone help me?
venadito78 (1) on 22, Jan. 2011 23:58 (HKT)
Works Fine!
For those people that are having trouble. You cannot just plug your ps3 remote directly to it. You must first connect a wired xbox remote to boot the converter and then connect ps3 remote. This must be done every time you turn system on!
outofmyelement (1) on 04, Nov. 2010 01:10 (HKT)
Eureka! It works!
Worked for me just as advertised. I'm not expecting a huge bump in Super Street Fighter IV success with a PS3 controller, but that has more to do with my own lack of skill than the XCM Cross Fire Converter. I just followed the procedure for setting it up, and it worked perfectly. It is a bit annoying to have to plug in a wired Xbox 360 controller every time you want to use it, but as kind of a hack device, it's not so bad (it was also annoying that I had to go out and buy a wired controller, but that's the way it goes). Didn't work with my Logitech G27 racing wheel, but that was kind of a pipe dream anyway. I just wish it worked the other way 'round, so I could play Killzone and Resistance with my Xbox 360 controller. Oh well, at least there's another product for that.
NeuroDread (1) on 09, Sep. 2010 04:25 (HKT)
Works awesome!
1. PS3 Controller works√
2. Sixaxis works√
3. Rumble Feature works√