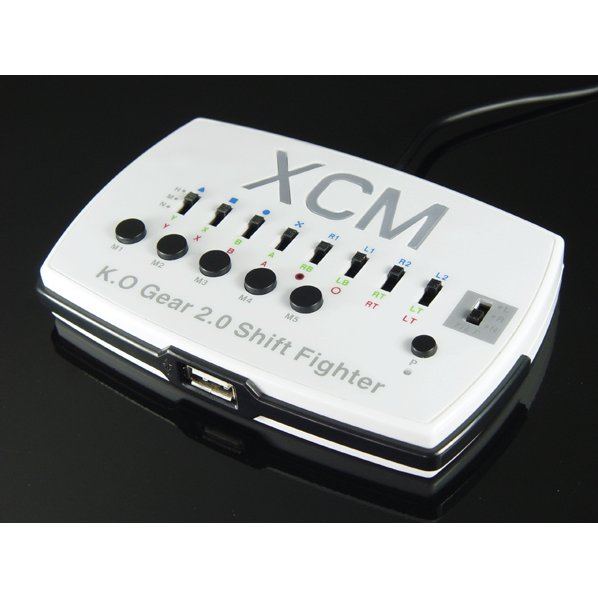 K.O Gear 2.0 also known as "Shift Fighter" brings fighting games to a whole new level. No longer do you have to be frustrated with having to press a combination of complicated button presses just to pull off a combo move. Save it and when you need to pull off the complicated combo move, simply press the button and the move is pulled off. No more multiple frustrated tries just to pull it off.

If you are familiar with XCM K.O. Gear 2.0 (Shift Fighter), why not let others know?

trsnolli (9) on 24, Apr. 2012 22:36 (HKT)
Extremelly fragile
Its a very good interface. I didnt notice any lag.
The leds are a way too bright (looks a bit ridiculus if you play in the dark).
But it is a pleasure to play with xbox360 controller (specially if you, like me, use to play xbox/xbox360).
The really bad thing is that this interface is extremelly fragile.
Mine stop working after few weeks (maybe bad luck) and I never droped it.
shirakani (6) on 13, Jan. 2012 08:53 (HKT)
Good for using a 360 controller with a PS3 (or vice versa if you own the 360 version). Hardly any conversion lag, but occasional dropped input here and there.

Macro feature is totally worthless due to it being on the device itself and not mappable to a button on the controller instead, and the 20 input limitation per button.

Decent device, not worth the price they're asking. It'd be fine at half the price.
trsnolli (9) on 06, Sep. 2011 23:43 (HKT)
Just loved it!
XCM KO Gear 2 is simply great!
It's plug'n'play!
Pros:
The cord has a good lenght;
There is an adapter for the original xbox controller;
Works as advertised;
I couldn't feel any lag;
Different colors to indicate the proper controller recognition;

If you prefer xbox or xbox360 controller, that's your adapter.

Bottomline: I haven't tried the "turbo function" or macro.