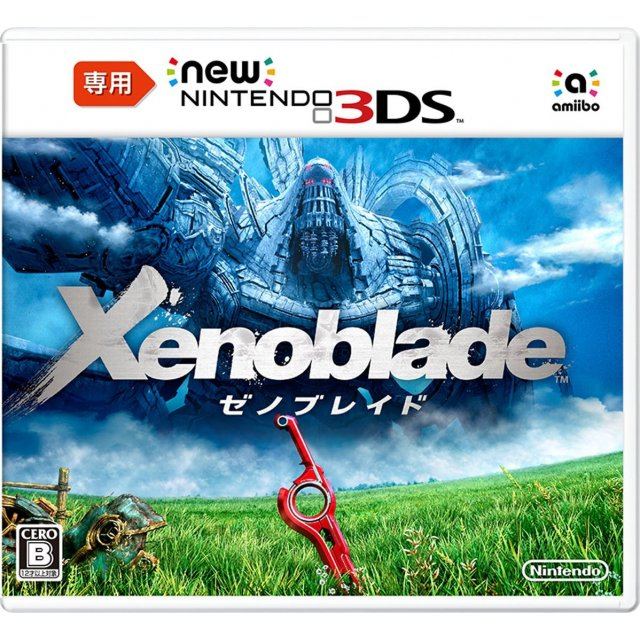 NTSC
24h In stock, usually ships within 24hrs
(Only 1 left in stock.)
Price
US$37.99
Play-Asia.com Return & Refund Policy
Click on a thumbnail to see more pictures for Xenoblade

(Only works for the New Nintendo 3DS)

Considered to be one of the best Japanese RPGs of all time, Xenobladewas a complete rarity upon release. Those who were fortunate enough to play Monolith Soft's RPG opus gave it exceedingly high reviews across the board, and the rest of the world could only live vicariously.

Now, with an updated port of the original Nintendo Wii title, gamers across the world can finally have an opportunity to play this legendary game, exclusively on the New Nintendo 3DS!

An ancient conflict of gods lives onthough those in the present, but they only know of one thing, that they must survive the onslaught of violent robotic creatures known as the Mechon. FollowShulkand his comradesas they search for the truth oftheir past, present and future with the ultimate answer lying with the mysterious sword "Monado."

Xenoblade takes place in a vast open world with a real promise that delivers what many open world games lack - that any location see can be traversed. While exploring exceedingly lush and well conceived environments, players will encounter side quests and the NPCs that give them; these include item hunting and monster hunting quests.

Exploration is highly encouraged, and without breaking the flow of travel, side quests completed are automatically turned in with the relevant rewards, removing the common mechanic of constantly returning to a hub world. There are also day-and-night cycles that affect in-game factors like events, item appearance, and quests; players can also set the time to the specific moment they desire.

Battle in Xenobladeis done via real-time in combination with action-based attacks, where manual movement and key positioning ensures for deep strategy. While party members auto-attack foes within an attack radius, limited manual commands can be made, but these are reserved for character specific moves called "Arts" and "Talent Arts", which are set with a cool down period. While leveling up is done with traditional experience points, the true potential of party members shine when developing their repertoire of "Arts."

To further affect the flow of battle, players must fully use the "Party Gauge," which fills overtime with successive attacks and allows the chaining of multiple attacks; but with each command, party members will also increase enemy ire through the aggro ring, making themselves the main target. There is also a "Visions" system, which gives players a sneak premonition into upcoming enemy moves, so by balancing chain attacks, paying careful attention to enemy aggro, and careful positioning, players can leave battles unscathed, but only with credit to their ability to be aware of such factors.

And while many open world games loses track of themselves through the sheer amount of content available, in game systems like the "Affinity" system will keep the story grounded, as players unlock the "Heart-to-Hearts" moments revealing deep character backgrounds, thoughts, and personality. This mechanic also affects the perception of the player's party in the eyes of the actual game world, making an immersive experience possible from the beginning till the end. And when all that's done, Xenobladehas a new game plus mode, carrying over progress between game completions.

Finally, Xenobladehas extensive character customization, with changes of outfits, armor, and weapons directly reflected in game, appearing in both scripted and field events.

Already a highly polished title, Xenobladeis a game that all fans of a premier JRPGs can look forward to playing.

If you are familiar with Xenoblade, why not let others know?

melonsoda (1) on 03, Jul. 2018 18:59 (HKT)
A classic, a must-have-played game.
Of course Xenoblade (Chronicles) is a classic. It first came out on the Wii, and this port for the new3DS is fantastic. It plays better than the original, especially the controls (looking around is much more convenient than it was on the Wii). The only problem is that there is no Japanese audio in the European/American 3DS-version, and this is why I ordered the Japanese version at Play-Asia – of course for this you need to be able to read/understand Japanese and you need a Japanese new3DS. On the Wii, there is Japanese audio (with English/German/etc. subtitles/text), so if you can't read Japanese and don't have a Japanese 3DS I recommend the Wii version. Of course, you could just listen the English voices, but to be honest, I don't like English voices in Japanese games at all, they usually just feel unnatural and don't fit the characters of the story. Anyway, Xenoblade is an unforgettable experience, a story about that you will think a long time, very atmospheric places to visit and explore, characters you will get emotionally attached to. Great game.
sunayaki (6) on 16, Apr. 2015 21:49 (HKT)
Not as awesome as I had hoped...
I bought the game because a lot of people seemed tor really like it. I wanted to try out the open world and experience the storyline for myself. Graphics aside, I didn't really like the gameplay or the story, so I was kind of disappointed.