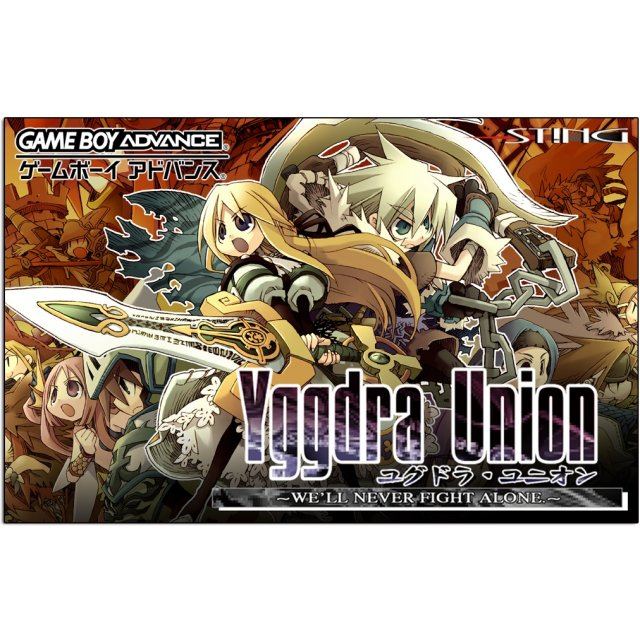 sold Out of print / Out of stock.
Manufacturer
Sting
Compatible With Game Boy Advance™ (GBA™)
Version

Ruled by a royal family said to be descendants of the gods themselves, Fantasinia is a prosperous and peaceful land -- until the peace is shattered by the invading forces of the Empire of Bronkia.Led by the young emperor Gulcasa, who seized control of the Empire in a brutal coup d’etat, Bronkia’s Imperial Army cuts a bloody swath through the people of Fantasinia and the Royal Armies of King Ordeene.Amidst the chaos, a young woman escapes from the besieged capital of Partina -- a woman with innocence in her face, and a sword in her hand.The girl’s name is Princess Yggdra, the last surviving member of the royal family; the sword is the Gran Centurio, a legendary blade once wielded by the founder of Fantasinia, and passed down through generations of royalty.Fleeing to to a remote valley at the southern tip of the continent, Yggdra meets up with Milanor, the charismatic leader of a band of thieves, and readies herself for a war of liberation...

If you are familiar with Yggdra Union, why not let others know?

PuNiao (365) on 29, Mar. 2007 19:54 (HKT)
Yggdra Union
What happens when a cute princess losses her kingdom to an invading force? Find a rag-tag group of Robin-Hood-style renegades and take it back, of course! In Yggdra Union, Atlus\'s latest offering for the Game Boy Advance, players are thrust into a deep, innovative and extremely rewarding tactical game that gives them almost 20 hours of gameplay. The story revolves around Princess Yggdra Yuril from the kingdom of Fantasinia. Fleeing the massacre of her family with her family\'s hereditary sword, she swears revenge. While the plot is paper-thin and filled with fantasy cliches (like those Robin Hood rebels), player will be coming back for the battle system.

Gamers play a card from their customisable deck each turn, which in turn effects the maximum movement, attacks and special manoeuvres of various units on the map for that turn. Effectively planning how to attack, defend and overwhelm the enemy is all part of the process. Although the main map features tiny pixel-representations of units, do not despair. The battle animation scenes are beautifully hand-drawn and animated. It does grow tiresome after a while to see the same battle animations, but this is tempered by the game\'s novel use of stances - defensive or offensive - while fighting. Doing one or the other allow units to press the advantage or charge and unleash special attacks.

While most tactical games are content to give mounds of stats and throw battle after battle at players, Atlus has consistently shown it can come up with innovative - and fun - re-inventions of the tactical genre. This is a must-get for the final days of the Game Boy Advance.