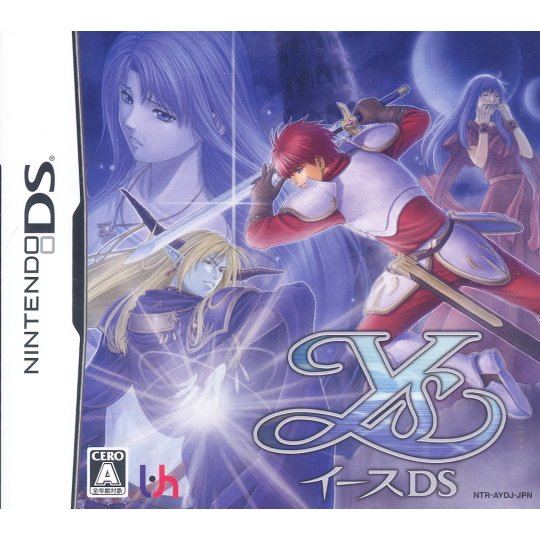 Works on all systems sold worldwide, a correct regional account may be required for online features.
1w Expected stock arrival within 1 week.
US$24.99
Our previous price:US$ 46.99
You save: US$ 22.00( 47% )
Manufacturer
Interchannel
Compatible With Nintendo DS™ (NDS™)
Version

Works on all systems sold worldwide, a correct regional account may be required for online features.
1w Expected stock arrival within 1 week
Price
US$24.99
Our previous price:
US$ 46.99
You save:
US$ 22.00( 47% )
Play-Asia.com Return & Refund Policy
Click on a thumbnail to see more pictures for Ys DS

The Ys series is said to be the mother of the fantasy RPG genre. This 2D RPG series features not only an exciting game play, engaging plot, dazzling magic and a set of charming characters, but also promotes traditional heroic qualities like innocence, compassion, chivalry and gallantry. With these attributes, the remake of this classic title is a refreshing change from the trendy games these days that celebrates graphic depictions of debauchery.Once upon a time the world was blessed by the twin goddesses. Because of their power, the world prospered and the land was filled with greenery. People have used the black pearl that embodies magical powers and created the precious metal Cleria. However, during its creation, side effects such as demons and evils emerged.It was already too late when the high priests discover the connection between evil and Cleria, although they have buried the metal deep into the ground, evil that stemmed from it has already infested the land. Under the terror of rioting demons, the people escaped to the shrine of Sermons, and using the powers of the black pearl, the priests cut the chains of gravity that ties the shrine to the earth and takes it away from the turmoil.Centuries passed peacefully, the people have forgotten about the twin goddesses and the shrine. When they discovered Cleria from underground, they dug it up as silver without truly fathoming its power, and once again, evil emerges.It is amidst this chaos that a young traveler Adol left his home to journey through the land, the sixteen year old has no idea what awaits him in his journey.

If you are familiar with Ys DS, why not let others know?

alerith (3) on 21, Mar. 2008 21:56 (HKT)
Lacking in every way
I was excited when I heard Eternal was getting a DS port, but I suppose I was expecting something, I don't know, finished. Sound effects and animations are largely absent, even though what IS in the game is taken straight from the PC version. The 3d backgrounds are terribly rendered and would have benefited tenfold by being the same 2D. The new controls are nice, but using the stylus ends up being clunky in comparison to the face buttons. It does a few things right, but unfortunately most of it is wrong. Don't waste your money, just go back to Ys Complete.