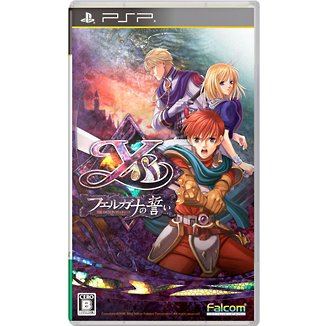 Click on a thumbnail to see more pictures for Ys: Felghana no Chikai

Let's go back to some orthodox fantasy adventures. Adol and his friend Dogi are going to the volcanic island of Felghana, Dogi's homeland, to free the people from under the rule of the tyrant. And these two will fight lots of monsters on their way.

Hugely popular when the game was released on the PC, Falcom installed numerous upgrades to the game and released it on the Sony PSP™. Characters are fully voiced in the game events and the colorful graphics are readjusted for the large screen.

You can choose from three sets of BGM and unlock pictures for the album as you further your adventures. It doesn't matter that you have played the game before, this new version will give you a smoother and fresher experience.

Gungnir: Mayari no Gunshin to Eiyuu Sensou
US$ 19.99

If you are familiar with Ys: Felghana no Chikai, why not let others know?

Hayato01 (503) on 08, Aug. 2011 10:08 (HKT)
great game
A GREAT GAME
gruntysrcul (2) on 02, Jun. 2010 12:59 (HKT)
Best Action RPG for PSP
Great update of YS 3 "Wanderers of YS" The graphics for this game are superb. Action is similar to Ark of Napishtim which is a good thing. Story and animation are also a delight. If you are a fan of the YS series and your looking for something rewarding this game is a must have!!!!
dmasden (26) on 12, May. 2010 05:39 (HKT)
Ys oath in felghana
This game is great an excelent remake of the origional ys 3. This game has a typical battle system you run around avoiding the enemies and slash them with your sword you can buy armor and shield and wepons from town. This game is colorfull and really expands on the graphics of the previous games you can simply pick this game up and play without having played a ys game before if you have played a ys game pick this one up you won't be disapointed It gets all full stars from me