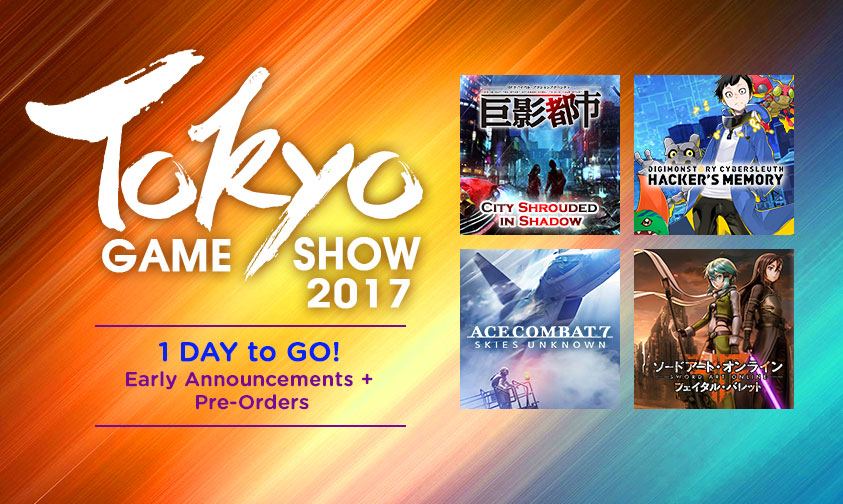 The excitement is upon us with the Tokyo Game Show 2017 now  starting!  The first 2 days –  21-22 Sept will be business trade days, 23-24 Sept open to the public.   With many many various games companies launching and announcing their new titles, we will try and give you a breakdown of the hottest announcements and show you how you can Pre-Order well in advance.  We start with the pre-announced games Bandai Namco Entertainment have mentioned so far:-

City Shrouded in Shadow (Japanese: 巨影都市 Kyoei Toshi) plays out in a city under great threat from a range of giant shadows.  In this sci-fi survival action adventure, the shadows come in all sorts of forms, on a different scale from humans, causing terror!  So it is left to the protagonist without any special powers to try and survive in this desparate situtaion.

Visually the game is spot on, with the traditional neon lights that illuminate the city night landscape to the convenient stores, building lights that bring an ominous glow to the night, which adds to the hustle and bustle of the city.  From the tranquil city and its familiar, everyday streets, it is suddenly overwhelmed and engulfed by the “giant shadows”!

Read more on the full game thanks to our friends at GEMATSU.

PlayStation 4™/Xbox One™ – US, Europe, Asia – Exp. To ship Dec 2018 – PRE-ORDER.
If you are a fan of the Dark Souls series then you will want to check out the next inspired similar title CODE VEIN. Playing Vampire like people called ‘Revenants’ you must feed on blood which can power your special abilities known as gifts.

Based in a post-apocalyptic world your vampiric soul is tasked with defeating the demons scattered across the world with the help of an ally to accompany you and help drink blood to access your supernatural powers.  You can drain the blood with three types of Blood Veil systems – Type Ogre, Type Hounds and Type Stinger, each its own unique method.  Powered by enemy’s blood this enhances your ‘gifts’ so you can weaken your enemy, strengthen your character, increase your ability with weapons and overcome attacks.

Players are their own avatar – all customized including changing the eye shape, color, gender, face type and even adding make up all face paints.  Clothing can also be customized to alter colors and style. The Battle system is driven by intense one-on-one battles, similar to Dark Souls, but this faster action paced game is a step up in the right direction.  Fluidity of combat and the ferocity of its enemies is now much heightened.

It is a dangerous world for the search of blood in this Dungeon action RPG genre.

Take on the ‘Lost’, explore and conquer in the world of CODE VEIN!​

From the world’s most elite brands, 180 cars can be chosen over 9 disciplines of motorsport and also 29 motorsport series in-game play.  From open wheel Formula One, Vintage open wheel, Indy Car, GT1, GTE, GT3, to LeMans, Rallycross and touring car models.  Plus, don’t forget to drive the Super, Hyper and big name road cars.

Project Cars 2 brings you the largest roster of tracks with over 60 circuits to choose from (with 130 different layouts), to suit the complete range of the 180 cars on offer!  Drive through realistic weather from all 4 seasons –  wind, snow, mist, rain, thunderstorms, to summer and spring patterns in daylight and night time racing. The Broadcasting element allows you to sit back and watch your race again from a different perspective to see where you can improve.  Or watch that spectacular crash again!

Drive the most iconic cars in this authentic, beautiful and adrenaline rush racing, with fantastic thrilling conditions and be the ultimate motorsport champion!!

I feel the need, the need for speed and here you definitely get some!  Maverick or Goose, this is Top Gun esque.  But instead of Maverick or Goose your confirmed list of characters are as follows – Trigger, Mihaly and Roas Cossete D’Elise, Princess of Erusea and this is also set in 2020 in country of Erusea, which has declared war on the Osean Federation.

Gamers are back in the cockpit of the most advanced war planes ever developed, ACE COMBAT 7 delivers the ﬁercest air combat experience ever created through photorealistic visuals, intense dog-ﬁghting action with authentic and futuristic warplanes with a great storyline.  There is even the option for virtual reality exclusively for PlayStation VR.  For VR, there will be a separate package of missions only accessible through the headset so command and conquer in first person perspective!

There are breathtaking clouds where for the first time you will be able to conceal yourself from the enemy, stealth style and sneak up on your target but be careful your plane doesn’t freeze after too long in the clouds.
The evolution of the game and graphics sets this air combat game ahead of the rest, with breath taking speed, maneuvers and air combat, to blow you or your enemy out of these unknown skies!!

Europe,  US + ASIA (Eng subs) versions – PlayStation 4™ (PS4™) – PRE-ORDER
The giant robot series has come smashing back!!!  Guns are blazing again in this head to head, arcade, metal on metal smash hit.This slick fighting game was first revealed at the 2016 Playstation Tokyo Game Show and is the 5th generation in the Gundam VS series. It was released in Japan and Asian territories (Chinese subs) on July 6th.  For PS4, the US and other versions are finally here and ready for pre-order!!

The game features improved graphics and sound. It retains its team battle gameplay but will also include modes only available on the PS4. Along with the standard Boost Step and Boost Dash techniques, a new “Boost Dive” mechanic allows players to boost downward at will, making combat much more fluid.

The Assist mechanic from Gundam Vs Gundam Next has been reworked into Strikers, which allows you to select your own assist unit. There are over 180 to unlock and select from, providing far more flexibility in combos.

Join the underworld of Hacker’s, lurking in the shadows utilizing viruses called Digimon to unleash their crimes!  In the not to distant future when everyone is in the logged into cyberspace where is the line between the real and digital worlds?
Keisuke Amazawa has no choice but to enter the digital world in an attempt to clear his name, prove his innocense and protet his family after being framed.

Two years ago, the first Digimon story series was released on PS Vita, as a Japanese classic turn based RPG game.   This has the largest collection of digimons and the game content focuses on the adventure in the digimon world called EDEN, training own digimons and combating with the enemy. A huge world view and game system earned a high reputation for the series in Asia.The protagonist is not the traditional Hero, like anime series, he uses the technique of hacking to discover secrets in the EDEN and realizes the crisis is crossing from EDEN into the real world. The upcoming game continues the story and brings a total of 320 Digimon and 90 different maps. The game also includes all missions and digimons from the first game on PS Vita.

Z-Warriors are healthy and full of energy! Join them in the exciting, fast-paced super-intense battles with Dragonball FighterZ, the new DB exciting installment developed by Arc System Works, the ruler of the fighting game genre! Train hard to launch the most powerful Kamehameha ever!

Dragon Ball Anime followed ‘Goku’ from childhood to adulthood, whereas Dragon Ball Z continues, and now the adult Goku and his friends try to defend the Earth.  They come against many villains in the shape of powerful androids, magical creatures and intergalactic space fighters.

You will feel at home with anime reproduced famous scenes with much higher resolution, spectacular fight sequences and aerial combat moves.  Join the announced characters Goku, Vegeta, Gohan, Cell, Frieza and Majin Buu and master your fighting styles and be the ultimate warrior.

Set in the fictional VRMMORPG that is Gun Gale Online.  Become the hero in the latest game of the SAO franchise in Sword Art Online: Fatal Bullet. Step into the versatile landscapes and environments of Gun Gale Online with unique and realistic designs resembling something out of a sci-fi movie and numerous other weapons and fighting styles to choose from.

Interact with characters from the Sword Art Online original novels, anime and previous games as you navigate a world that is vastly personalized and visually enhanced. Play as the protagonist, battle against opponents using new weapons and further customize gameplay by creating skills and abilities. Full dive into Sword Art Online: Fatal Bullet!

A special thanks to Bandai Namco for the overview of the game.