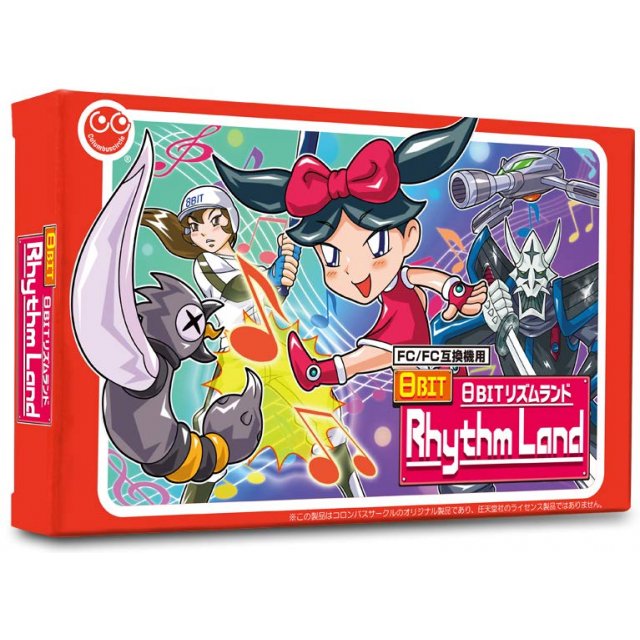 This product is a game cassette that lets you enjoy 8-bit game for Famicom. In four built-in games, a total of 20 songs are recorded. The artist from Chiptune, a legend of the 8-bit music worked on the songs is the heart of this rhythm game!

Note:
- This is not a licensed product of Nintendo.
- May not run properly with Famicom (depends on the year make) and other compatible Famicom system.

If you are familiar with 8Bit Rhythm Land, why not let others know?

barrows (1) on 09, May. 2019 18:02 (HKT)
Nice rhythm game with a good selection of music
First of all, the game does work on a real Famicom; I bought one just to play the game since it doesn't work on my clone system (a Retro Freak.) Don't be put off by the "may not run properly on a Famicom" line. It works fine on one.

Second, the music is well made, a good selection of tunes from various artists which work well with the mini games. That's what I bought it for and it didn't disappoint. If you're into 8 bit chiptune songs you're probably going to find a lot to like here, in fact you'll probably want to play the 16 bit version too (it has a Yuzo Koshiro track.)

The games themselves are simple rhythm games, mash the correct button at the right time along with the music. If you like rhythm games I see no reason you won't like this. It's not groundbreaking, but the gameplay is solid. There are four different games, each associated with a set of songs, as well as a few difficulty levels to keep things interesting.

Graphics are what you'd expect from a Famicom/NES title. Reasonably bright and colorful within the limits of the system, and the artists knew what they were doing.

I'm rating it four stars, mostly due to it not working on the Retro Freak and the somewhat confusing lack of information on the page regarding what it will run on. Otherwise I'm happy with the game!