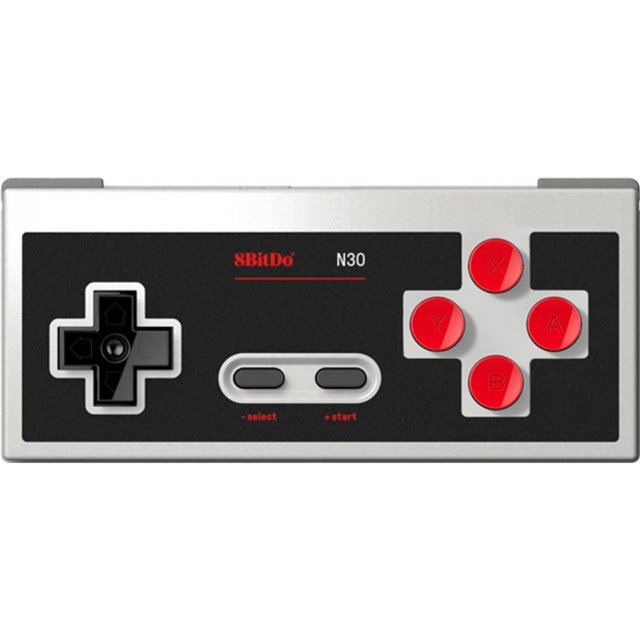 Hardware:
-Bluetooth 2.1, CPU and Flash
- Firmware can be upgraded to support more devices in the future.

Note: Smartphone & Stand are not included.

If you are familiar with 8Bitdo NES30 GamePad, why not let others know?

dallase1 (2) on 25, Sep. 2016 22:47 (HKT)
Too musch of a pain to pair to Wii
I bought this controller to play Virtual Console games and NES SNES Emulator Games but it's such a pain to pair with the Wii that it's not worth the hassle plus it was a pain to get it to connect to my PC the first time I used it, it would auto turn off due to time out before Windows 7 located the drivers for it. Pairing it with the Wii is a pain, you have to remove the batteries in the Wii Remote that is set as player 1 in order to get the NES30 to be set as player 1 and it's confusing on how to pair it and it's a pain to get it in Wii mode does not always go into Wii mode and trying to figure out how when and how to press the Red Pairing button on the Wii is confusing, there is no documentation on how to do it, just a vague Youtube video showing someone doing it but they don't explain the details. Also when you do finally get it paired to the Wii it cause the Virtual Console games to erase the High Scores on the games. It might be great to play Tablet Cell Phone and PC games with but no for Wii games, better off just getting that NES, SNES, Gamecube, N64 combo adapter thing that connects to the Wii accessory port on the Wii Remote and use the real thing.
sergiovillicaa (92) on 03, Aug. 2016 21:50 (HKT)
Great control!!!!! A must have!!
I have seen this controller announced like last year, I was not that much interest, until they announced the receiver for nes, I got very exited about this, so I ordered this controller and te receiver. Was very easy to plug to the nes and pairs very easily, by default the b botton is mapped in Y, a botton in B, x is turbo botton of b, A is turbo button of a.

The feeling of the controller is very similar to the original nes controller, it comes included the usb cable in gray color similar to the nes, also a key chain very retro style, the package very retro feeling, nice details they offer to the retro console player, I was so happy opening this!

Now about the control gameplay, I was playing battletoads and my bes was connected to a hd upscaler, I can feel not lag at all very natural all buttons, the only thing, the d pad, in the brawler stages it was very natural, but in the turbo tunel in the last part where it gets very fast I felt little slow the reaction, but I was able to pass, I was able to pass most part of the game until I got to stage 11 where there is this circle thing following you and you must press the direction of the pad in the correct way, I had trouble with this stage, if you dont press correctly the toads moves very slowly, I found out when I pressed down, the d pad was doing down and left at the same time, so it was pressed to the corner, maybe thats the reason I had trouble with the last part of turbo tunel. But dont get me wrong this controller is inclredible, I tried with different games, feels so natural, just in very fast a difficult parts maybe it doesnt work, but in plataform games like mario, contra, castlevania, ec, this is perfect! Also I didnt updated rhe firmware, maybe they can make better by updating.

The only bad thing I can think of this controller, is the support in the official web page, with the controller comes an x stand, I had no idea what this thing was for, I kept looking in the official page, took me a while to find, this is a stand for tablet or phone so you can play. Also the firmware updates are little confusing, what the updates does.

But I really recommend this controller, I am so happy!!