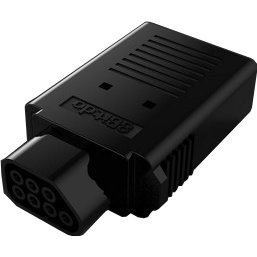 8Bitdo
Rated
By Our Customers
Compatible with NES™
24h In stock, usually ships within 24hrs.
US$15.19
Limited time offer - Secure yours now before the offer expires!

Manufacturer
8Bitdo
Rated By Our Customers
24h In stock, usually ships within 24hrs
Price
US$15.19
Our previous price:
US$ 19.99
You save:
US$ 4.80( 24% )
Play-Asia.com Return & Refund Policy
Click on a thumbnail to see more pictures for 8Bitdo Retro Receiver for NES

A joint effort with Analogue NT, 8Bitdo's newest product is clearly aimed for a very specific demographic, however, it doesn't just end there! For those who grew up during the 8-bit era of the Nintendo Entertainment System aka the birth of mainstream console gaming, you'll instantly recognize the seven pinned head on the Retro Receiver For NES.

While wireless controllers for the NES already exist, 8Bitdo's bluetooth dongle aligns itself with the company's desire to give gamers more options; not just content with being able to connect all of 8Bitdo controllers to an NES wirelessly, they expanded functionality to allow the use of PS3, PS4, Wii Remote, and even Wii U Pro controllers to the mix! Powered by the NES controller port, this plug and play dongle will let people play all the classics again, especially if heritage controllers have their wires affected by age.

Analogue Nt and 8Bitdo's collaboration also comes equipped with a built-in CPU and FLASH memory chip with upgradeable firmware, and even offers mulitplayer for two to four players.And true to their style, 8Bitdo has made sure that the Retro Receiver also supports Windows and MacOSX (X-INPUT) via the built-in USB port, making emulation gaming another option with the same amount of controller selection.The Retro Receiver also supports third party retro devices as well, so long as they have an NES controller port, making it compatible with the Analogue Nt and aftermarket retro consoles.

A tiny yet powerful device, the Retro Receiver For NES istruly bringing the venerable NES out of nostalgia and towards the contemporary gaming spotlight, and is exclusively available here at Play-Asia.com.

Special Features
- Additional buttons mapped to turbo on all controllers
- Compatible with two-four Retro Receivers for multiplayer player games
- All 8Bitdo controllers are compatible with Mac/PC, iOS, Android and many next gen systems

If you are familiar with 8Bitdo Retro Receiver for NES, why not let others know?

drzimmermann21 (13) on 24, Jan. 2019 12:01 (HKT)
great product
as always with 8bitdo
sergiovillicaa (92) on 09, Aug. 2016 21:14 (HKT)
Exellent agapter!! Whish they sold this 20 years ago!
I am always hunting for original controllers for the nes, this days that is almoust impossible to find, when I saw rhe announce about this adapter, I had my doubts, always this kind of things doesnt work as they announce, after watching some review, they said this thing was very good, I decided to buy. Also I bought 8bitdo controllers with the nes design. This thing works very well.

About the control vbutton mapping, I am happy how they put it, I think it deppends on the firmware installed, I just received mine the 1st of August so I think i git a newer firmware.

Also tried wii mote, so easy to pair! Just like original wii! It works so nice, I am happy this give me so many control support, and I have so many spare controllers for my other consoles.

The only bad thing I can see about this is the official web page, it looks pretty, but so hard to find the correct information, I was trying to look for detail manual, but is not that much detailed, also to make new mapping of the buttons I think you have to use computer and do something to the firmware... I think... Also the firmware is so confusing, if I download the most new it carries all the updates of the other updates? Or each one has different and specific function? I feel so scared to update, I sont want yo break my adapter.

Plugged it in and nothing worked. Didn't realize I needed to upgrade the firmware to use a Wiimote or Wii U Pro Controller.

Plugged the USB into the receiver and my computer, and nothing happened. Come to find out I have to hold the USB connector in the receiver at a certain angle or it would not work.

After I got the firmware flashed it worked.

The Wii U Pro controller worked great with no noticeable lag.
The Wiimote on the other hand worked, but I have to sync it to the receiver every time I turn the console on, unlike the Wii U Pro. Also, the Z button on the Wiimote is mapped to a button which gets pressed all the time if your fingers are near it.
1 »