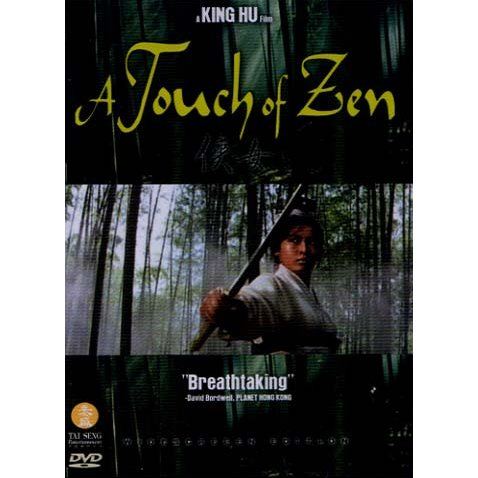 A Touch Of Zen

sold Out of print / Out of stock.
Please take note that, once purchased, this item must be paid immediately and cannot be cancelled or returned.
Manufacturer
Tai Seng Video Marketing
Feature
Hsu Feng, Roy Chiao
Version

Ming Dynasty noblewoman Yang must escape from the evil Hsu. She seeks refuge at a decrepit town where she gets assistance from a naive scholar and a group of mysterious, yet powerful monks.

If you are familiar with A Touch Of Zen, why not let others know?

backstepprogram (15) on 14, Aug. 2004 21:10 (HKT)
A Touch of Familiarity
A TOUCH OF ZEN is a little marvel of a film that modern cinemaniacs probably don\'t revere as much as they might given the fact that much of what\'s explored in the legend has already influenced countless other more contemporary films, and, thus the impact of ZEN has probably lessened over the years. This tale of redemption has experienced a resurgence of interest on the coattails of CROUCHING TIGER, HIDDEN DRAGON, but it lacks the emotional resonance of that film for today\'s more cynical audiences.

Still, ZEN isn\'t easily dismissed. It\'s a formidable story, based on legend, that\'s well worth the screen time. A word to the wise: the film clocks in at around three hours, and this is largely due to the photography of lush visuals. Arguably, ZEN is one of the most beautifully photographed films of its time.

Disadvantages? The aforementioned audio track does sound less-than-remastered. Especially, the music accompanying the story has a decidedly \'tinny\' quality to it, and the track actually drops about five seconds of any sound during one of the tense moments of Part I (the film is told in two pieces). Also, the wonderful choreography of two major fight sequences unfortunately take place at night, shrouded in darkness; while the filmmaker clearly wanted to use the mystery of darkness to his advantage, I don\'t think he wanted his audiences squinting so much. The translation of this film from the big screen to the small screen even darkens those scenes more, and the action is a bit of a loss as a result.

Definitely worth a rent for fans of serious martial arts films. The mysticism is thick here, and, while some may only guess at the possible impact of the film\'s conclusion, it\'s a great conversation starter for film groups.