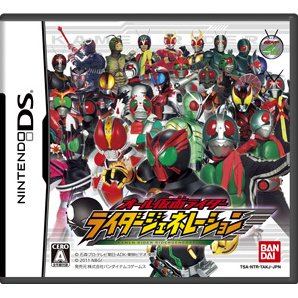 Works on all systems sold worldwide, a correct regional account may be required for online features.
1w Expected stock arrival within 1 week.
US$34.99
Our previous price:US$ 38.99
You save: US$ 4.00( 10% )
Manufacturer
Bandai Namco Games
Rated By Our Customers
1w Expected stock arrival within 1 week
Price
US$34.99
Our previous price:
US$ 38.99
You save:
US$ 4.00( 10% )
Play-Asia.com Return & Refund Policy
Click on a thumbnail to see more pictures for All Kamen Rider: Rider Generation

Kamen Riders are the childhood friends of people from many generations. Join the party to celebrate the franchise's 40th birthday. Riders from the 1971 titles join forces with the heroes from the newest Kamen Rider Oz series to combat evil monsters that banded together. Choose your player character and his partner and set off. Cut-in scenes with animated action sequences let players view the damage they do to their opponents. Each Rider has their special set of ability, Combo Change and Clock Up are just a few of them. Since the game is a party for everyone, players are free to choose the difficulty. From easy to super challenging, this game has all the action you need.

If you are familiar with All Kamen Rider: Rider Generation, why not let others know?

V-for-Viewtiful (2) on 20, Jul. 2013 12:00 (HKT)
Kamen Rider: Rider Generation
While this game is a solid side scrolling beat em up on its own even with knowledge of the kamen rider series, this game is a real treat for big fans of the kamen rider franchise. The lore of all the kamen rider shows is spot on in this game. Difficulty is very easy but that can be changed as the game is quite challenging on hard especially if your rider is at a low level. The game is very import friendly you don't need to understand Japanese to beat the game even though it kinda sucks not knowing the dialogue between the riders and their arch enemies. I recommend this game to any fans of kamen rider or beat em ups in general.
bastionw (1) on 06, Apr. 2012 10:28 (HKT)
All Kamen Rider : Rider Generation
A fantastic side scrolling beat em up with all your favorite Riders past and present. Has great flashy Hissatsu moves and a nice RPG like level up system! VERY easy to play with no japanese language knowledge, all you'd miss is the story which you can easily look up. Highly recommended to all Kamen Rider fans.
KyuRider (1) on 21, Jan. 2012 04:25 (HKT)
All Kamen Rider : Rider Generation
Best Kamen Rider Game to date where else would you find a kamen rider game with all the riders and no region lock the finishers are spectacular to look at pulling of many combos like battle toads lots of replayability which is only doubled when all the cheat codes are added 8.5/10
goshiro_muto (1) on 21, Sep. 2011 12:48 (HKT)
All Kamen Rider: Rider Generation
Simply put, it's an enjoyable beat em up in the vein of games such as Final Fight and Double Dragon. However, instead of 2-3 characters, you have 40+ characters, Kamen Riders from both the Heisei and Showa era, from Ichigo to the newest rider, Fourze. If you are a fan of the series, then you get a lot of enjoyment out of this game. It's also great for people with only limited knowledge of Japanese, as the in-game text is entirely in Hiragana and Katakana.
fullmetal24 (2) on 15, Sep. 2011 08:14 (HKT)
All Kamen Rider: Rider Generation
It's a fun sidescrolling beat-em' up similar to double dragon or River City Ransom, except with every Rider from Ichigo to Fourze also a cameo from Birth!