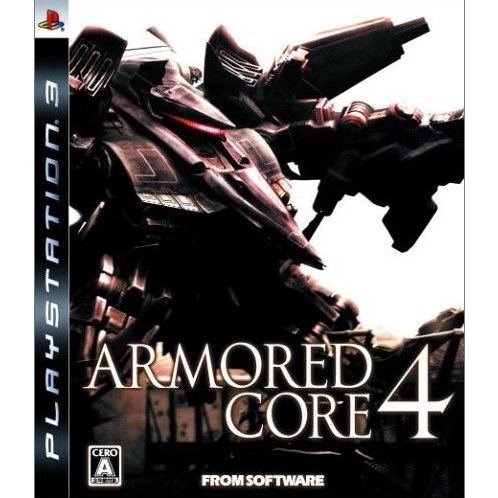 From Software
Compatible with PlayStation 3™ (PS3™)

Works on all systems sold worldwide, a correct regional account may be required for online features.
1w Expected stock arrival within 1 week.
US$109.99
Manufacturer
From Software
Compatible With PlayStation 3™ (PS3™)
Version

Works on all systems sold worldwide, a correct regional account may be required for online features.
1w Expected stock arrival within 1 week
Price
US$109.99
Play-Asia.com Return & Refund Policy
Click on a thumbnail to see more pictures for Armored Core 4

Armored Core®, the mech action game that defined the mech genre is back to take on next-generation platforms! Armored Core® 4 reinvigorates the brand by offering an all-new storyline, new environments, and online capability. The 10th anniversary of the acclaimed franchise will be punctuated with a leap to next-generation platforms that will ensure the highest quality in both gameplay and visual performance.

If you are familiar with Armored Core 4, why not let others know?

PuNiao (365) on 17, May. 2007 08:48 (HKT)
Armored Core 4
If you\'re new to the Amored Core 4 (AC) series, be warned - 20 fingers are not enough to play this game well. Between flying with the thrusters, managing the overboost and countering enemy missile strikes with your own, you\'ll have your hands full just staying on your feet. The Armored Core series has always been about two things - designing your giant robot warriors or \"mechs\" and taking them into battle. But hardcore mech fans will probably spend more time in the garage than on the battlefield. There, you can customise just about everything about your mech, from the type of legs to the armanents carried.

Just like its predecessors, AC places a great emphasis on the customisable process, with each and every part having a distant effect on your mech\'s performance. Added one too many cannons to your mech? You\'ll have to choose four legs or tank treads if you want to keep your aim true while firing your huge guns. If you prefer to get up close and personal with your foes, AC4 lets you do that, too. Outfit your mech with laser blades and good boosters to give yourself the advantage of speed. A nice feature of the design system is the ability to let the system auto-balance your mech\'s stabilisers. This means players unfamiliar with the stabilisation settings can just pick the weapons they want and let the system optimise the rest. This is a friendly option for less experienced players.

After you\'ve completed your tweaking, it\'s time to head out. And this is where the cracks in the shiny facade of AC4 begins to show. The mission system of AC4 is pretty standard - as a mercenary, you accept jobs for cash. Complete these jobs, and you can spend your hard-earned money on better parts in the shop. Each mission, however, can be painfully short, with some lasting no more than a minute or two. So, just as you\'re beginning to get into the groove, the mission announces itself complete and you\'re yanked back to the mission select screen. The graphics, while much improved from AC4\'s predecessors, could still do with a little more polish, especially in indoor battles. Mission design was a bit of a mixed bag.

Developers From Software have clearly thought a little harder about the tasks they throw at you. In one mission, you\'re expected to freefall into a giant chimney and destroy the enemies lurking in the structure beneath. This would be easy, if not for the ground-based cannons firing at you. To succeed, you must dodge the enemy fire and still manage to avoid the sides of the chimney at the same time - talk about frantic. The level design, however, is still as barren and sparse as ever, with little life or soul to the areas you\'ll venture into.

The game itself is in Japanese, and comes with a English-cum-Chinese manual. And once you learn your way around the menus, the language barrier is not too high. Despite the nitpicks, the action is still solid, after all, this is a game that lets you build and pilot a spider-legged mech with giant plasma cannons on each shoulder. If you can look past the inconsisten mission design and the bewildering controls, there is a solid core of fun to be had.
Anonymous on 17, Jan. 2007 05:47 (HKT)
If you liked the Armord core series before...
BUY IT!!! NEW SYSTEM BETTER GRAPHICS SAME GOO MECH ACTION!