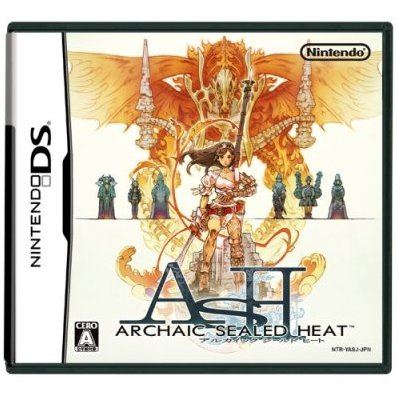 Works on all systems sold worldwide, a correct regional account may be required for online features.
1-5d Expected stock arrival within 1-5 days.
US$8.99
Our previous price:US$ 58.99
You save: US$ 50.00( 85% )
Manufacturer
Nintendo
Rated By Our Customers
1-5d Expected stock arrival within 1-5 days
Price
US$8.99
Our previous price:
US$ 58.99
You save:
US$ 50.00( 85% )
Play-Asia.com Return & Refund Policy
Trustpilot
Trustpilot
Click on a thumbnail to see more pictures for Ash: Archaic Sealed Heat

This RPG takes place in a medieval European-like country named Milinia. On her seventeenth birthday, the princess Aisya will be crowned queen. Her subjects are gathered around the palace while her uncle, the regent who has been looking after both the princess and the country in place of the king watches on with great pride.However, this is not to last. For the moment the bracelet of Milinia touches Aisya's wrist a giant flaming serpent descended from the skies and set fire to the whole country. The green, prosperous Milinia and its majestic palace is no more, everything has fallen apart around Aisya when she finally came to her senses.While the casualties are great, miraculously, some warriors survived the flame, this include the regent. Although they are no longer human, they are alive as ash soldiers. Accompanied by these survivors, Aisya sets off to find out the truth behind the flaming serpent and ways to revive her country.

If you are familiar with Ash: Archaic Sealed Heat, why not let others know?

sonorityoflife (38) on 11, Aug. 2015 08:04 (HKT)
Great turn-based strategy RPG for the DS
Despite only having touch-screen controls and not having any fast-forward options for attack animations, the gameplay is solid.

Reminded me of Sakura Taisen or Valkyria Chronicles, or more recently Codename STEAM, where AP is used up when moving characters on the grid. A reserve of AP is necessary to perform an attack on a nearby enemy during that turn.

Final Fantasy fans will feel at home, as character classes and items have similar names as the older games. Definitely recommended.
rafael.schm.up (75) on 28, Jun. 2012 02:04 (HKT)
Beautiful
Beautiful cutscenes, fun game, but heavy on japanese. (Oh, and the case is awesome)
lavauxrudy (18) on 01, Jun. 2012 23:46 (HKT)
Hironobu Sakaguchi's mastery finally on Nintendo DS
Final Fantasy's father at work on Nintendo DS was an interesting prospect already, and the final result was well worth waiting. Being the first 2GBit game, the extra space was put to good use to produce some impresive CG characters and movies. The story is always interesting enough to keep you hooked and the battle system will appeal to fans of both Fire Emblem and Final Fantasy since it mixes elements from both.
jahanzebkhan17 (45) on 21, Mar. 2012 09:18 (HKT)
Beautiful graphics
Support Mistwalker!
mbmah (32) on 02, Dec. 2011 07:23 (HKT)
Interesting mix
Brought to you by the father of Final Fantasy, ASH promises interesting gameplay and a good story.

It lives up to its reputation and with the beautiful graphics, talented voice actors and engaging game play, it does just that.

However knowledge of Japanese is required to fully enjoy the story of the title.
1 »