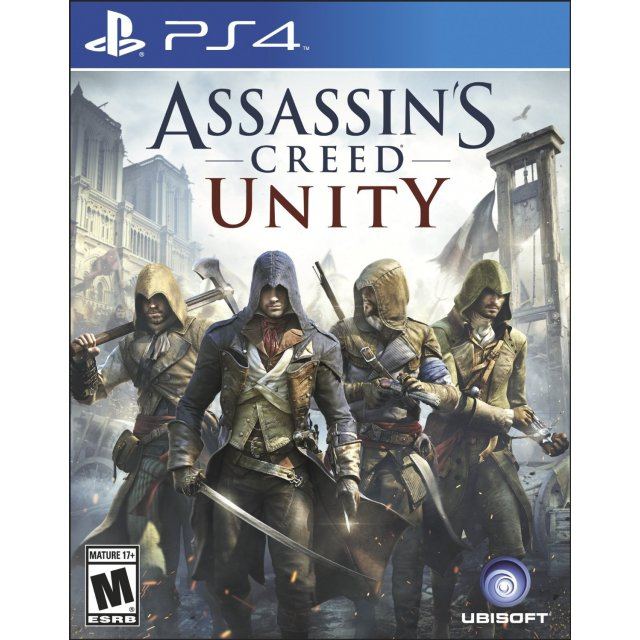 Ubisoft
Rated
By Our Customers
Compatible with PlayStation 4™ (PS4™)

Works on all systems sold worldwide, a correct regional account may be required for online features.
1w Expected stock arrival within 1 week.
US$21.99
Our previous price:US$ 34.99
You save: US$ 13.00( 37% )
Manufacturer
Ubisoft
Rated By Our Customers
1w Expected stock arrival within 1 week
Price
US$21.99
Our previous price:
US$ 34.99
You save:
US$ 13.00( 37% )
Play-Asia.com Return & Refund Policy
Trustpilot
Trustpilot

Be the Ultimate Master Assassin:

Dive deep into the historical action-adventure of Assassin’s Creed Unity, the seventh major installment in the Assassin’s Creed series and the successor to 2013’s Assassin’s Creed IV: Black Flag. Venture yourself in the most intense and immersive Assassin’s Creed city ever created. Engage into the terror of the 1789 French Revolution where people are rising up against cruel aristocracy. Yet in this time of chaos and menace, a young man named Arno will undertake an extraordinary journey to expose the true powers behind the French Revolution, thus transforming him into a true master Assassin.

The French Revolution Brought To Life:

Introducing the power of the new Anvil Engine, rebuilt from the ground up for new gen. consoles, players will now experience the French Revolution as never before and shape up an entirely new destiny. Assassin’s Creed Unity gives players an unprecedented degree of freedom and control over your Assassin. Get full control in parkour mechanics, a reinvented fighting system for a richer combat experience. Disappear anywhere as a new stealth mode, cover system and crowd manipulation, lets players hide anywhere in Paris.

Players can customize their own play style by choosing weapons, gears, outfits, and specialized skills. Become a unique ultimate master assassin as you enjoy the deep customization mechanics to create your own master assassin.

Invite or join your friends in Brotherhood Mission where players can play flawlessly in 2-4 players co-op in Assassin’s Creed Unity. Experience the open world of 18th century Paris alongside other players in challenging and dynamic scenarios. Take part in unique narrative-driven missions crafted exclusively for assassins to fight in tandem as they take down targets in the city. Make history together as your team gets stronger and bring endless possibility in Assassin’s Creed Unity.

If you are familiar with Assassin's Creed Unity, why not let others know?