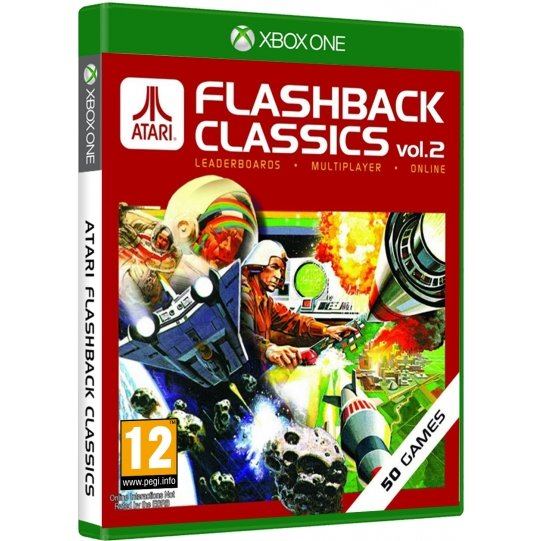 Works on all systems sold worldwide, a correct regional account may be required for online features.
24h In stock, usually ships within 24hrs.
US$12.89
Our previous price:US$ 29.99
You save: US$ 17.10( 57% )
Manufacturer
PQube
Compatible With Xbox One™ (XONE™)
Version

Works on all systems sold worldwide, a correct regional account may be required for online features.
24h In stock, usually ships within 24hrs
Price
US$12.89
Our previous price:
US$ 29.99
You save:
US$ 17.10( 57% )
Play-Asia.com Return & Refund Policy

Relive the golden age of video games on the latest generation consoles. Each volume of Atari Flashback Classics brings 50 iconic Atari games, complete with multiplayer, global leaderboards, and much more. From arcade legends to 2600 classics, this massive library includes some of the most popular Atari titles ever released, including Asteroids, Centipede, Missile Command, and many more. Intuitive interface design delivers the responsive feel of the originals on modern controllers. All new achievements, leaderboards and social features, combined with an amazing archive of classic artwork make Atari Flashback Classics the ultimate Atari collection!

If you are familiar with Atari Flashback Classics: Volume 2, why not let others know?

[This review is based on another version of this product]
sergiovillicaa (92) on 26, Jul. 2017 06:55 (HKT)
Excellent compilation of retro games!!
This game has the exact same mecanics as the first volume, the only difference are the games included. I can confirm this volume has better selection of games, this include more complex games like adventure, wich you need to pick up a key to open a door, and pick up different items, I have never played before this game, but for atari 2600 I am very impresed to see this kind of game.

This is an excellent compilation, I recomend this for only true hardcore old school gamers, this only includes the original versions of the atari 2600, there is no new remix graphics, also to mention there are few arcade versions of the games.

It is nice to see they included the picture of the original box of each game represented in a 3d model, to bad this picture is really small would be super cool if we could zoom this 3d models, in the case of the arcade games you can see how the original arcade used to look in a 3d model of the game, also all the original manuals are included for each game, they look like scans of old manuals, this is a super nice touch!!

There are a few bad things about this compilation, there is no way to change the size of the screen, so this game is not full screen, some games appears with art work of the game in each side of the screen. Some games the stick is just to sensitive, there is an option to change how much sensitive this is, but you need to reset each time to change this option, so it takes some time before you can find the correct one, also the display options, has scanlines and things like this, but they are not explained each one what it does, so it takes long time to configure each game to look the way we want.

Also there were so many classics I wanted to see here, like qbert, pacman jr, etc, I guess because of copyrights issues they only included atari brand games.

So around 25 games are so so like chess, pong, I mean is nice to get this games, but gets boring very fast, and the other 25 games so much fun to play, also there are few two player games you cannot play alone, you need another player to be able to play.

I recommend this for only hard core retro gamers!!