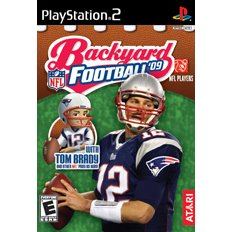 Backyard Football ‘09 for Playstation 2 is the latest and greatest version of the best selling kid’s football video game series ever. Get realistic, hard-hitting football action with Super Bowl champ Tom Brady and other players like Ronde Barber, AJ Hawk, Peyton Manning, Adrian Petersen, Ray Lewis, Brian Urlacher and other NFL super stars as kids. With a pro from every NFL team you can build your dream team of pro players! Choose to play as your favorite NFL team or Backyard Team. And now for the first time, Backyard Football ‘09 features All-Pro Game mode and Tournament mode along with season and single game options, plus a new Hall of Fame to show off your best season. Outrageous power ups and unlockables combined with authentic football action make Backyard Football ‘09 the most fun you can have off the field.

No reviews for Backyard Football 2009 yet.