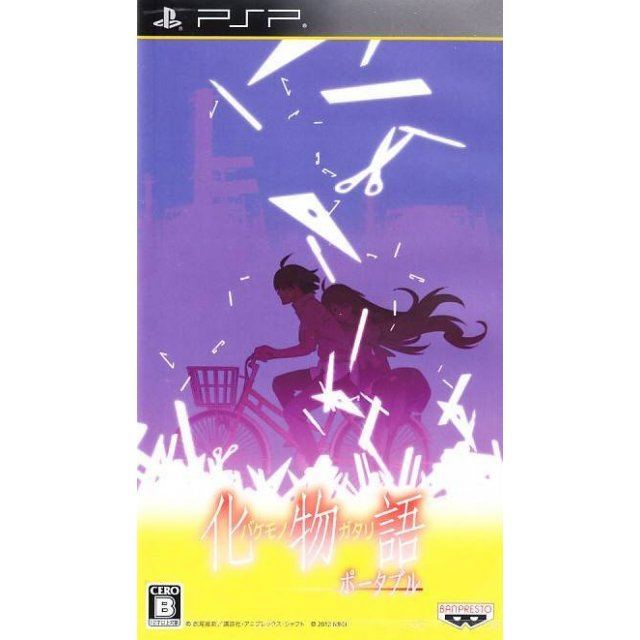 Works on all systems sold worldwide, a correct regional account may be required for online features.
24h In stock, usually ships within 24hrs.
US$24.99
Our previous price:US$ 27.99
You save: US$ 3.00( 11% )
Manufacturer
Bandai Namco Games
Compatible With Sony PSP™ (PSP™)
Version

Works on all systems sold worldwide, a correct regional account may be required for online features.
24h In stock, usually ships within 24hrs
Price
US$24.99
Our previous price:
US$ 27.99
You save:
US$ 3.00( 11% )
Play-Asia.com Return & Refund Policy
Click on a thumbnail to see more pictures for Bakemonogatari Portable [Regular Edition]

Bakemonogatari a ball of strange demons, girls with poisonous tongues and quirky characters. The game is a dialogue action battle. Learn the quotes and say them during the fights to defeat your opponents, persuade them, or make them fall for you. Not all words can do. You have to say the words that fit with your character to activate its full power. Once you affect the other character with your words, you can combo them, or attack them with a sure kill skill. You can even interrupt the other characters when they are talking to give yourself an opening to attack. The story mode includes the character arcs from the anime such as Hitagi Crab and Mayoi Mai Mai. You can create your own battlefield in the free-battle mode and write your own story in the fantasy mode.

If you are familiar with Bakemonogatari Portable [Regular Edition], why not let others know?

I won't lie: if you've watched the anime you'll have a good chance of just winging it. No matter what, some command of Japanese is necessary, otherwise you'll wind up with some really disjointed conversations (e.g. using "You are an idiot" to reply to "Good morning!")

As you progress you'll unlock other characters and you can use them in a free-style battle mode, perfect for characters who didn't really meet in the anime (e.g. Araragi's sister Karen vs his girlfriend Hitagi).

This game might seem boring for someone who didn't enjoy the conversation element, but for fans of the series I'd recommend it.