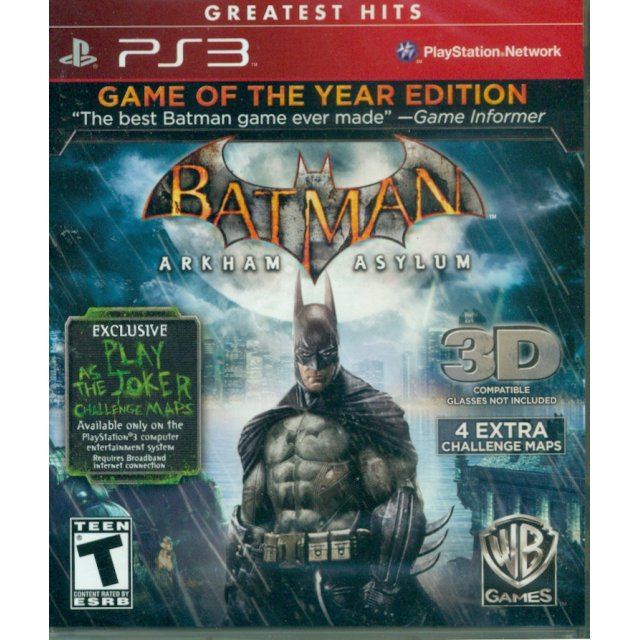 Eidos Interactive
Rated
By Our Customers
Compatible with PlayStation 3™ (PS3™)

Works on all systems sold worldwide, a correct regional account may be required for online features.
24h In stock, usually ships within 24hrs.
US$17.19
Limited time offer - Secure yours now before the offer expires!

Manufacturer
Eidos Interactive
Rated By Our Customers
24h In stock, usually ships within 24hrs
Price
US$17.19
Our previous price:
US$ 34.90
You save:
US$ 17.71( 51% )
Play-Asia.com Return & Refund Policy
Trustpilot
Trustpilot
Click on a thumbnail to see more pictures for Batman: Arkham Asylum [Game of the Year Edition 3D] (Greatest Hits)

Batman: Arkham Asylum returns with a GAME OF THE YEAR EDITION on PLAYSTATION®3 that includes extra content and now, for the first time, Trioviz™ 3D vision on home consoles. Batman: Arkham Asylum launched to critical acclaim in summer 2009 and has often been referred to as ‘the best licensed game ever’ and a ‘must buy’ on gaming websites and magazines. It’s been praised for delivering a compelling mix of action, stealth and puzzle-solving gameplay tied with a dark, original storyline penned by five-time Emmy award-winner Paul Dini and supported by a famous cast of voice actors, including Mark Hamill as The Joker and Kevin Conroy as Batman.

If you are familiar with Batman: Arkham Asylum [Game of the Year Edition 3D] (Greatest Hits), why not let others know?

william.fu (67) on 17, Oct. 2015 00:26 (HKT)
Great Batman Game! and Great Service!
I never expected a Batman game to be this great! In fact I was drawn into Batman's mind and psych as I played it and it really made me come to know about this Dark Knight more. I love the fights and the different ways to take down enemies and also the Joker! I got to say that I loved every moment as he tries to tempt Batman to do something...THANK YOu Play-Asia! and Keep up the Great Service!
icemathew (4) on 28, Jun. 2014 00:37 (HKT)
Gran juego
Es un gran juego que te engancha desde el primer momento de empezar.
Es altamente recomendable y además, ¿a quién no le gusta ser Batman?