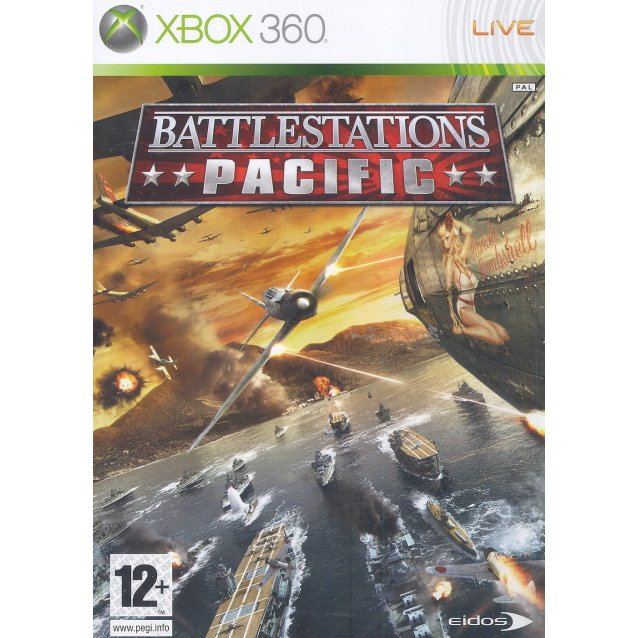 sold Out of print / Out of stock.
Manufacturer
Eidos Interactive
Rated By Our Customers
Compatible With Xbox360™ (X360)
Version


Click on a thumbnail to see more pictures for Battlestations Pacific

Prepare for a totally new combat experience as you fight massive air, sea and undersea battles in WWII's Pacific theatre in direct command of multiple warships, planes and submarines in this epic solo and online tactical action game.

For the first time experience the true intensity of large scale aerial and naval combat in a unique mix of direct action and tactical play. Directly control dozens of highly detailed warships, aircraft and submarines in a 'free-control' environment as you design and execute the best plans of attack. Command the colossal firepower of a fully armed battleship, engage the enemy in fierce dogfights through flak-infested skies, or utilise the silent attack of your submarine to unleash deadly torpedo attacks on unsuspecting enemies.

Battlestations: Midway follows the story of naval recruit Henry Walker, whose first assignment as a gunner at Pearl Harbor is the starting point of an incredible career at the heart of the US Pacific Fleet in 1942, in what was to become one of the most inspirational military campaigns in history.

If you are familiar with Battlestations Pacific, why not let others know?

cwnsalgado (96) on 10, Nov. 2010 23:03 (HKT)
Good game
Very good! I recommend it.
kenkenken (25) on 16, Oct. 2010 13:23 (HKT)
Good price
It was possible to buy it much cheaplyer than the commodity put on the market in Japan where I lived. It is very satisfactory.
Will (4) on 13, Oct. 2010 22:32 (HKT)
A great mix of Action and RTS
Battlestations Pacific really isn't a sequel as much as an improvement upon the original Battlestations game. The game features a newer graphics engine however, with noticeably more surreal environments. With a lot more focus now on both the gameplay and the visual side of the game, Battlestations Pacific makes an interesting play.
The story line is something I wasn't expecting when I picked up the game. Aside from providing the obvious U.S. campaign where you fight your way across major battles in the Pacific to Japan, the game let's you play as if Japan had won the war, completely pushing allied forces back to California. It's something I found refreshing and new, however a little exaggerated, in the always repeated WW2 themed action game.
The gameplay provides a good mix of both RTS and Action. The RTS is what you'll notice first, as you command fleets of battleships and bomber squadrons on a simple, easy to use tactical map. Aside from that aspect however, you also have the option of taking manual control of your units. This is interesting because I find it very reassuring when I lose a ship after knowing that it at least put up a good fight under my command rather than just disappearing off my tactical map. The controls of the game are a bit more than what one could consider a sit down and play feel, but are none the less smooth after so fiddling around.
The graphics in Pacific are a huge step up from what was seen in Battlestations Midway. The water flows elegantly in calm weather and smashes against your ship's side in the stormy night. The islands and buildings rendered in the game now also look much better, with AA emplacements and bunkers standing out more than they did back in Battlestations Midway, adding a whole new feeling of realism and depth to the game.
Don't be expecting a great flight or combat simulator when buying Pacific, but be looking more towards playing a tactical based combat action game, giving you control over large fleets and individual units at the same time. Overall 5/5 and definitely worth the 980¥ I paid for it.
activewater1 (32) on 08, Oct. 2010 13:25 (HKT)
enjoyable
finally got this game, wanted to try it for while now.

seems like a fairly average game, nothing really stands out for me, but it delivers a fun experience from both the US and JAP armies during the war in the pacific, and enables you to use ship and airplanes which is fairly enjoyable most times but can get abit dull towards the end of the game

good game for boring days were no other games tend to take your fancy but nothing overly great about it.
Rndr (18) on 08, Oct. 2010 02:40 (HKT)
Battlestations Pacific
Nice game, plenty units an a great encyclopedia of Japanese and US, real challenge on veteran.
1 »