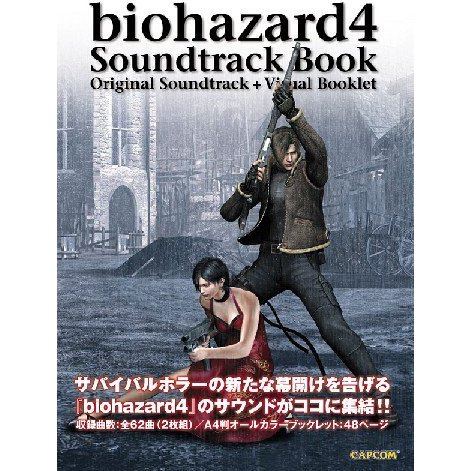 Capcom
Rated
By Our Customers

sold Out of print / Out of stock.
Please take note that, once purchased, this item must be paid immediately and cannot be cancelled or returned.
Manufacturer
Capcom
Rated By Our Customers
Version

You loved Biohazard4, the break-out hit survival horror action game, and now you can delve further into the world of BH4 with this new offering. Now you can enjoy both the detailed graphics of the macabre locales featured in the game, brought to the page in full, stunning color, as you listen to the haunting soundtrack on the two included CDs.

This book is directly imported from Japan and features 48 pages of full-color graphics. It also includes the 2-CD original soundtrack featuring 62 tracks in all (approximately 160 minutes of music). This is a must-have for all fans of Biohazard 4.

Note: This book is in Japanese

If you are familiar with Biohazard 4 Soundtrack Book Original Soundtrack + Visual Booklet, why not let others know?

leeb1 (1) on 19, Oct. 2009 05:01 (HKT)
Superb art and music.
This hardback book has less than fifty printed pages in it but, as you would expect, the artwork is first class. The heroes and villains, including the monsters, are painted in various poses and a few locations are included. The titles are in English and the descriptions in Japanese.

For fans of Resi 4 and/or Resident Evil the biohazard 4 Soundtrack Book is probably essential.
nightpounce (47) on 08, Sep. 2009 23:01 (HKT)
Biohazard 4 Music CD
If you enjoyed the music in the RE 4 game then this CD collection is a must have. The music is dark and haunting and the book the CDs come in is full of artwork, sketches and pictures from the game. Even if you don't read Japanese you will enjoy looking through the book and the music is brilliant.
NetDiver (4) on 30, Mar. 2006 01:06 (HKT)
Something different...
Like the previous reviewer wrote, this soundtrack is a bargain. You\'ll get the hardback visual book (with nice rendered and actual in-game character model still shots) and the two soundtrack CDs. The music is very ambient toned for the most part. If you\'re familiar with the music from the Silent Hill -series, you\'ll find this item worth the look. Note that there is no cd-case, the thick back cover of the book acts as a cd-case. Quite original approach. There could have been some prodcution sketches in the book, but you can have everything. Top notch game soundtrack!
Anonymous on 26, Mar. 2006 06:02 (HKT)
Resident Evil soundtrack with a differance!
Wow, sure is a bargain for it\'s price! For most music, this is as good as it gets! Lotsa tracks why you read, and awe over the visual art work and game stills.
Unlike the other Resident Evil soundtracks, that just come with a 5 page inlays, this is a fair amount of content. (All writing inside the book is writtern in Japanese, but who cares the pictures make up for it)
A must have for any Resident Evil fan, very hard to get hold of!!
As for the tracks...well all the tracks from the game-including the bonus min-games tracks.