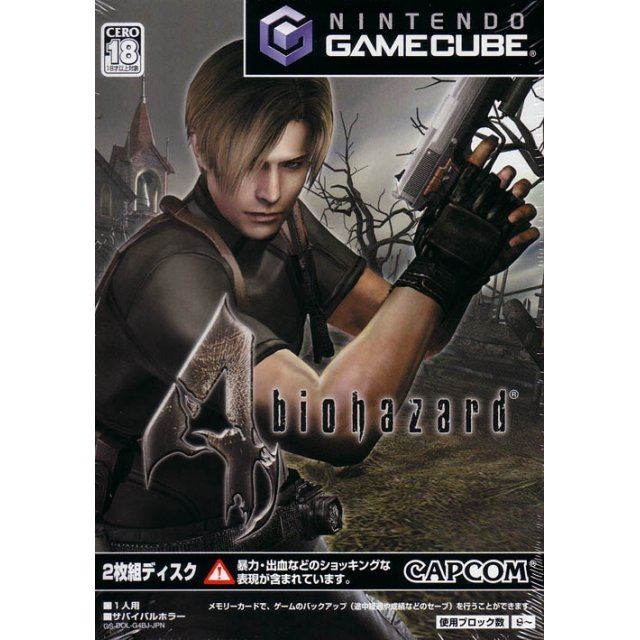 Capcom
Rated
By Our Customers
Compatible with GameCube™ (GC)
For JPN/Asian systems, use Freeloader for other.

sold Out of print / Out of stock.
Manufacturer
Capcom
Rated By Our Customers
Compatible With GameCube™ (GC)
Version


Click on a thumbnail to see more pictures for BioHazard 4

In this latest installment of the wildly popular franchise, players are reacquainted with Leon S. Kennedy, Raccoon City's idealistic rookie cop from Biohazard 2. In the six years since the destruction of Raccoon City, the U.S. government has been able to destroy the nefarious Umbrella Corporation. Fast forward to 2004 and players rejoin Leon, now a U.S. agent with a top-secret mission. In this Nintendo GameCube exclusive, his investigation into the abduction of the President's daughter has led him to a mysterious location in Europe teeming with unimaginable horrors. Order ships with the Free Making Of Bonus DVD as long as stocks last
Contents of the Making Of Bonus DVD

If you are familiar with BioHazard 4, why not let others know?

NetDiver (4) on 19, Jan. 2006 18:44 (HKT)
Game of the Year 2005!
No doubt about it, this is one of the best games on GCube! The game is a testament of GCube\'s capalities. Anyway, the japanese version is remarkably import friendly to the english understanding audience as the most key dialogue is in english. Some dialogue is in spanish. Main menus are in english, in-game menus and other text is in japanese. As always, you need a japanese console or the Freeloader software to play this version of the game. The japanese version comes with a making of -DVD, which is pretty interresting if you understand japanese. On the last note the game packeting is notably different from the european version. It\'s about half the size of the standard dvd-case, in which the PAL-games are supplied.
boomheadshot611 (7) on 17, Dec. 2005 05:19 (HKT)
Best game in yeears, in the top 3 games ever made
Dont miss the perfect game. RE4 blows away the competition with everything you could ever want in a game. perfection.
doug-funnie (3) on 13, Aug. 2005 01:04 (HKT)
Das Beste Resident Evil aus der Reihe
Super geniale Effekte, klasse Spielführung, mega Grafik.
Kurz um, das Beste Resident Evil das es bis jetzt gibt....
Spike83 (2) on 28, Jul. 2005 05:53 (HKT)
Awesome! It Really is that good!
Comparing the other Resident Evil games to no.4 maybe unfair but you just can\'t deny the fact that everything about it outshines the previous efforts handsdown.
The Graphics are the best i\'ve seen on pretty much any console game that is out at the moment, just showing that the Gamecube can still bring it with the big boys!.
The Gameplay has been changed up and improved, it suits the Gamecube Controller a treat.
Basically if you own a Gamecube then you must buy this game!, if you don\'t then go out and buy one! It is worth it just to play this game!!!!.
Anonymous on 16, May. 2005 05:32 (HKT)
No title
the perfect game
1 »