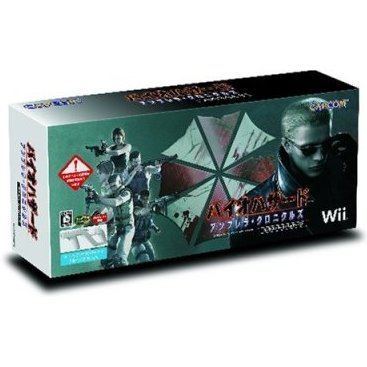 sold Out of print / Out of stock.
Manufacturer
Capcom
Compatible With Nintendo™ Wii (Wii™)
Version

If you are familiar with Biohazard Umbrella Chronicles (w/ Wii Zapper), why not let others know?

[This review is based on another version of this product]
slaymail2k-shop (6) on 12, Oct. 2010 20:44 (HKT)
Intense zombie shooter
I first played the 2010 sequel, Darkside Chronicles. Of course the graphics of Umbrella Chronicles are not as good as in the sequel, but the action is almost at the same level. If you buy this game, you will get a solid rail shooter set in the Biohazard universe. Well-known characters and locations, new insights into the outbreaks and upgradable weapons make this game a must have for Biohazard fans. The most fun lies in the two player mode, of course.
But beware: Playing with Wiimote only does not really help the atmosphere. This game is best played with a gun controller, for example the Wii Zapper or the House of the Dead Handcannon.
thomas.cheng.qa (25) on 09, Dec. 2009 23:16 (HKT)
Good, but not the best yet
This is a good game but I don't think it deserves the 5 stars that most people here are giving. Sure the graphics are nice, the gameplay is excellent, and the story is also good but there is still definitely room for improvement. The boss fights can sometimes be a bit annoying because you are not always certain where you have to hit the enemy. There are also these places where you will just plain "die" if you don't do the instructed moves on the screen in time, which just ruins the pacing of the game.

All in all though if you are a fan of the Bio Hazard series then this game is for you. If you are a fan of gun-shooting series like Time Crisis or any of the SEGA made gun shooting games, then this may not be for you as the pacing of this game is much slower than your average arcade shooter.
docomogame (540) on 21, Oct. 2009 10:48 (HKT)
Welcome to new experience biohazard !!
New experience for biohazard'fan , you can see & expolre raccoon city by play rail gun game ^^