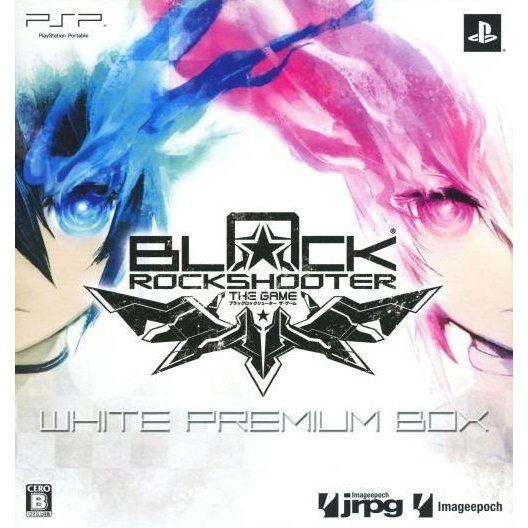 sold Out of print / Out of stock.
Manufacturer
Epoch
Rated By Our Customers
Compatible With Sony PSP™ (PSP™)
Version

Fast, adrenaline pumping and absolutely hip, Black Rock Shooter is available to gamers. The game takes place in an apocalyptic world where the majority of the human population is killed off in a great war. In the midst of chaos, Black Rock Shooter wakes up to deal with the seven "disciples" and the infinite amount of mecha.The BRS creator huke returns as the character designer, Noshima Kazushige of Final Fantasy fame joins the team as the scenario writer. This is a game that combines story, exhilarating action and beautiful characters into one package. Ride on your bike, aim your Black Rock Canon at your enemies and shoot.

If you are familiar with Black * Rock Shooter: The Game [White Premium Box], why not let others know?

nano-gaby (5) on 25, Dec. 2012 01:21 (HKT)
Just Awesome!
Awesome game to own!
[This review is based on another version of this product]
trunions (151) on 18, Dec. 2012 14:58 (HKT)
Great game.
Though the game is very easy I still really enjoyed it. I hope that it gets a english localization soon.
omegaprimethelastprime (15) on 09, Dec. 2011 12:57 (HKT)
fun for a while
this game was ok, it was fun for a while, i got it knowing it would be like this, i just got it for the figma, which is very awesome by the way, a shame it doesn't come with her white rock cannon or white blade seen in the game
[This review is based on another version of this product]
blackrockshooter38 (1) on 23, Nov. 2011 06:16 (HKT)
My first view of the game
I've seen the trailers, seen videos of the gameplay, read forums, and even heard every song in the game, and though I've neither played or have gotten this game yet, I'm already seeing some amazing things to expect once I do! One of them includes the amusing Apostle missions that come later on, while others include a perfect story, the best graphics on a PSP I've seen since Kingdom Hearts: Birth By Sleep, and even the opening theme by One OK Rock-No Scared-has got me shaking in excitement! There may be some faults, such as the two Bike riding EX missions, but with a manga due to coexist with the game, I'm just too happy to care about its bad points! Huke, Epoch...you did awesome with this epic game and I'd love to see sequels and a possible prequel made in the future! It would better explain this game's storyline and I would play this one and others (if any) endlessly and never get tired of the game if I wanted to! Fortunately, I'm that type of gamer, so I highly recommend this game to anyone that plays it, regardless of which country version it is!
shinohai (22) on 28, Sep. 2011 15:47 (HKT)
Great Soundtrack
Awesome OP and music throughout the game. The extras that come with the White Premium Box are great as well of course. Great art by Huke though gameplay is somewhat lacking and thus disappointing for a title with such a large following.
1 »