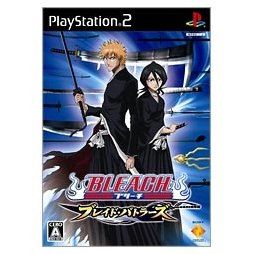 Collections
Sony Computer Entertainment
Rated
By Our Customers
Compatible with PlayStation 2™ (PS2™)
For JPN/Asian systems only.

Bleach Blade Battlers is a fighting game based on the popular Japanese manga series. The game supports up to four players onscreen at once; characters include Ichigo Kurosaki, Rukia Kuchiki, Orihime Inoue, Yasutora Sado, Uryu Ishida and others.

If you are familiar with Bleach: Blade Battles, why not let others know?

[This review is based on another version of this product]
TheKeybladeMaster0021 (7) on 23, Mar. 2010 09:45 (HKT)
Wicked
It's a really nice Bleach game and I'm happy that it's ON a ps2. Though, unlocking some of the characters in here were a little hard but not too hard and the grafics are like playing Naruto Ultimate Ninja and the same with the special moves. But over all, it's a really good game and I want to get the second one to this. But, no offence, it doesn't really compair to Ultimate Ninja. Ultimate Ninja will always be my first game to play...other than FFVII ofcourse...
ilovecorey_123 (2) on 27, Aug. 2007 10:32 (HKT)
BLEACH 4EVER!!!
Kick butt game! Im getting the sequel!
nikdog (1) on 27, Jul. 2007 08:29 (HKT)
Best Fighting Game ever...
This has to be one of the best fighting games i\'ve ever played. we even play it at our high school, biggest club turnout ever. i can\'t wait for 2nd, i comes about a month into school
kathyweathers (14) on 25, Jun. 2007 08:23 (HKT)
bleach blade battlers
I love bleach blade battlers I like the gameplay and the characters in it.But I wish they had more characters I hop we see tons of more characters in bleach blade battlers 2 coming in Sep07
prince on 17, Feb. 2007 13:03 (HKT)
No title
its a good game but still not better than naruto hero 3
1 »