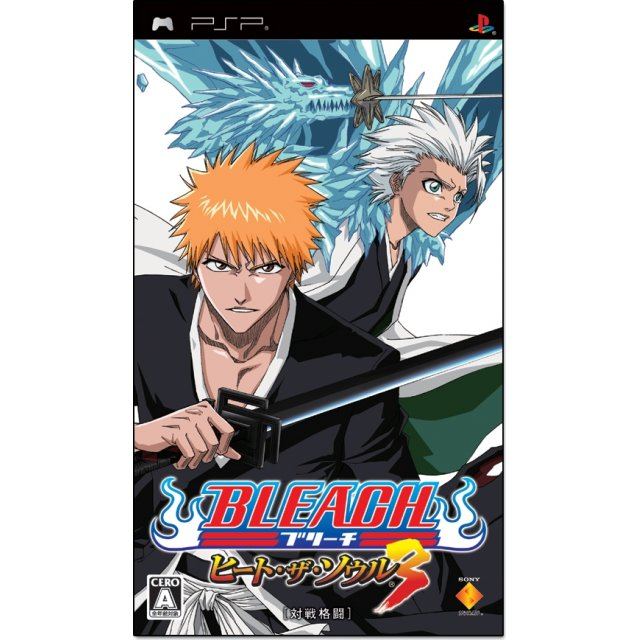 Works on all systems sold worldwide, a correct regional account may be required for online features.
1w Expected stock arrival within 1 week
Price
US$64.99
Play-Asia.com Return & Refund Policy
Click on a thumbnail to see more pictures for Bleach: Heat the Soul 3

In Bleach: Heat the Soul 3, "Kurosaki Ichigo" helps the mysterious girl "Kuchiki Rukia", who has lost her powers in the course of saving him.After undergoing rigorous training under the tutelage of "Urahara Kisuke", Ichigo finally becomes a real Shinigami and unleashes the true powers of his beloved sword, "Zangetsu". Rukia is imprisoned in the Senzaikyu (literally palace of atonement) as it is a serious offence to impart Shinigami powers to normal people. And so, Ichigo and friends sneak into the Soul Society...

If you are familiar with Bleach: Heat the Soul 3, why not let others know?

azambaig504 (4) on 17, Mar. 2007 23:03 (HKT)
No title
Man i\'m a sreious bleach fan so i\'m probably gona get this game today or tommorow. Everyone buy thois game or else while you\'re sleeping Ichigo will kill you with his ban kai. [Just kiddin] =]
mictalianoz100 (3) on 27, Feb. 2007 18:34 (HKT)
havn
i just wanna say, that these games come out too fast! I still havn\'t gotten this game, but i already see a listing for heat the soul 4! along w/my naruto,DBZ and other games i play how am i gonna keep up.
mfitzgeraldj (1) on 24, Jan. 2007 09:29 (HKT)
Best Bleach game
This game is by far the best game I have ever played for the psp. The only thing that\'s annoying is the Japanese of course. But if you\'re a Bleach fan it\'ll be easy to understand. Soul Road is kinda hard because I can\'t read kanji so I kinda guess what the answer is based on the partners expression when the ask a question.
malcolm_157 (1) on 18, Jan. 2007 05:02 (HKT)
AWSOME
if you are a bleach fan, or even just a person who likes fighting games this is for you, best game ever :) got fast shipment too
zfam (1) on 16, Jan. 2007 02:47 (HKT)
bleach 3
I never really liked bleached until i got this game. this is one of the most fun games i have ever played. the graphics are great along with the characters this game is very addicting. so for all of you bleach lovers you have to get this game.
1 »