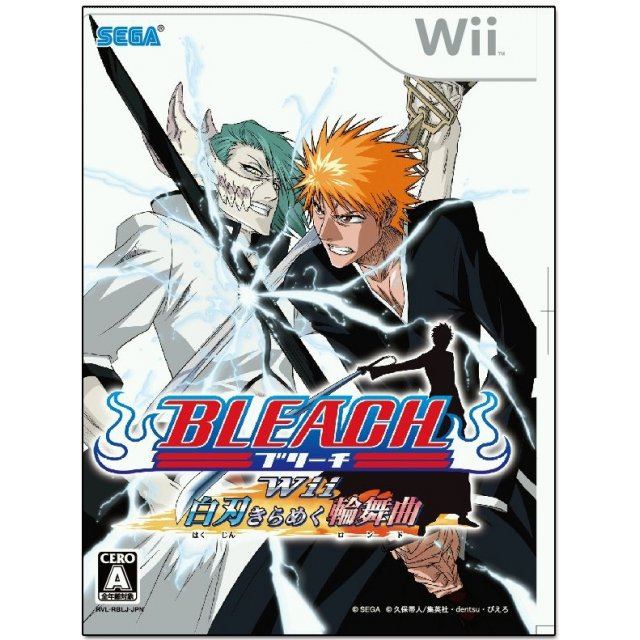 Sega
Rated
By Our Customers
Compatible with Nintendo™ Wii (Wii™)
For JPN/Asian systems only.

NTSC
1w Expected stock arrival within 1 week.
US$59.99
Lunar New Year Sale
Limited time offer - Secure yours now before the offer expires!
Our previous price:US$ 69.90
You save: US$ 9.91( 14% )
Manufacturer
Sega
Rated By Our Customers
Compatible With Nintendo™ Wii (Wii™)
Version

Bleach: Wii Shiraha Kirameku Rinbukyoku is based on the popular Japanese anime series and marks the first game of the series so far released on any of the next generation systems. Bleach Wii is a one-on-one fighting game with unique aspects resulting from Nintendo's Wii Remote controller.While you move your character with the Nunchuk, the real action is done with the Wii Remote. Wave the controller like a sword to perform various attacks (slash back and forth for normal attacks, slash downward for high strikes and other special moves such as uppercuts and more).

If you are familiar with Bleach: Wii Shiraha Kirameku Rinbukyoku, why not let others know?

metalfiddi (15) on 19, Apr. 2012 20:13 (HKT)
Great game
This is a very good game and should be a must-buy for every bleach fan. There are a lot of characters and their moves are good. Some of the moves are from the manga and anime but others are made up since they hadn't been shown yet. The controls are interesting and the Wii makes it so much fun to play. Thank you Play-Asia :).
jeevas333@hotmail.com (6) on 15, Jun. 2009 16:24 (HKT)
horrible
enough said
seow545 (5) on 15, May. 2007 02:58 (HKT)
Bleach: Wii Shiraha Kirameku Rinbukyoku
The Best Bleach Game Ever Made, You can said that again & again............ A MUST BUY.....
The PreOrder DVD was great too.........
kyuubi (2) on 28, Apr. 2007 13:19 (HKT)
No title
The game is cool and datel needs the freeloader for the wii fast
Nite (1) on 29, Mar. 2007 02:55 (HKT)
Bleach Wii
Overall a fairly good game. There is a decent amount of characters and just about everyone is balanced (except for Hanataro as far as I know). Episode mode (story mode) seems a bit short with only a few characters (perhaps more stories will be unlocked through arcade mode). The game can become quite tirng and repetative after a while (especially in arcade mode) but VS mode is always fun against friends. Recommended if you are a true bleach fan, or a fan of any good fighting game.
1 »